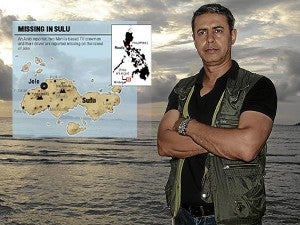 MANILA, Philippines—Abu Sayyaf gunmen have freed two Filipino members of a Jordanian TV journalist’s crew believed to have been kidnapped by the al-Qaida-linked militants in June last year as they set out to interview the extremists in their jungle lairs in the southern Philippines, police said Sunday.

Atyani is believed to still be held by the gunmen.

Letrero and Vela are Manila-based cameramen.

“They really lost weight because they were constantly under stress each day,” Freyra told The Associated Press.

It was not immediately clear who worked for their release.

Police Officer 3 Radzmi Sambalsino of Sulu police’s Regional Operations and Planning Division told INQUIRER.net that the wife of Vela confirmed to authorities there was no ransom money paid for the release of the two Filipinos.

Sambalsino said the victims were found around 10 p.m. Saturday.

Quoting Renato Gumban, head of the PNP Anti-Kidnapping Task Force, radio reports in Manila said Letrero and Vela will soon be transferred to Zamboanga City for appropriate medical treatment before they are brought to Manila.

Vela and Letrero were hired by Atyani last year for a series of coverage in Mindanao. The three went missing on June 12 last year though their abduction was confirmed by authorities a few days later.

Atyani is bureau chief of the Al-Arabiya News Network in Southeast Asia. He is known for interviewing Osama bin Laden months before the Sept. 11, 2001, attacks.

Military officials have said Abu Sayyaf militants have earlier demanded 130 million pesos ($3.1 million) for the release of Atyani and his two Filipino crew members. Hundreds of rebels of the Moro National Liberation Front, which signed a 1996 autonomy deal with the government, have also been negotiating with the Abu Sayyaf for the release of Atyani and other foreign hostages, including two European bird watchers who were abducted last February.

Moro commander Khabir Malik said his group had taken the initiative to seek the freedom of the hostages to help the government clean up the image of Sulu, a predominantly Muslim province where the Abu Sayyaf has carried out deadly bombings, kidnappings for ransom and beheadings, primarily in the early 2000s.

U.S.-backed military offensives have crippled the Abu Sayyaf in recent years, but it remains a national security threat. Washington has listed the Abu Sayyaf as a terrorist organization. With a report from Jamie Marie Elona, INQUIRER.net