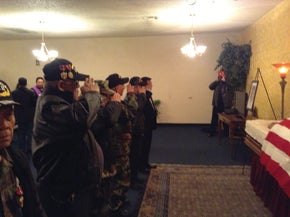 A Nevada congressman will soon reintroduce a bill that would compensate Filipino veterans for services to the US during World War II. U.S. Rep. Joe Heck told Asian Journal that the bill aims to fast-track action from Congress.

The move came in the heels of the recent death of 100-year-old Filipino veteran Silverio Cuaresma Sr., who died last Jan. 20 without getting recognition for his services to the U.S. during World War II, and as Las Vegas is set to celebrate Filipino Veterans Fairness Day on February 3
“It’s both saddening and disappointing, especially since I got to know Lt. Cuaresma over the last couple of years as we continue this fight to try to get veterans recognized for their services to the United States,” Heck said.

“It just caused me to redouble my efforts to move the legislation that I introduced last time,” Heck also said in the interview held at the funeral services for Cuaresma last Jan. 24.

Last September, Heck introduced House Resolution 6464, which instructs the Department of Veterans Affairs (VA) to accept documents from both the Philippine government and the U.S. Army in determining eligibility.

“This bill clearly defines the types of documents the [VA] Secretary must accept as proof of service so that our denied veterans will be recognized,” Heck said in a statement.

The congressman, a Republican who represents Nevada’s third congressional district, had presented details of the bill to Cuaresma at a nursing home facility where he lived that time.

Cuaresma was the oldest of five Filipino WWII who reside in Nevada and whom Heck refers to as the Mighty Five. In a speech in Congress last July, Heck introduced the five Filipino veterans who had been speaking on behalf of their compatriots, seeking recognition and compensation for services they rendered to the U.S. One of the five, 83-year old Romeo Barreras, died last December.

“Hopefully we’ll be able to get through the process to make sure the remaining Filipino-American veterans get the honor and the benefits that they earned,” Heck said.

WWII Filipino veterans are eligible for certain benefits such as disability compensation and burial benefits. But this group of veterans are fighting for military benefits that were promised to them by then U.S. President Franklin Roosevelt 70 years ago.

In 1946, however, the U.S. Congress passed the Rescission Act that stripped Filipinos of the benefits they were promised. Of the 66 countries allied with the US during that war, only the Philippines was denied military benefits for its soldiers.

In 2008, the Obama administration finally set aside funds for benefits of Filipino veterans. But thousands of Filipino soldiers in the US and the Philippines were deemed ineligible to receive amounts from the Filipino Veterans Equity Compensation (FVEC) fund due to lack of required documentation.

The FVEC is a $198-million fund authorized by President Obama in 2008 for distribution as one-time lump sum payments of $15,000 each to Filipino World War II veterans who are U.S. citizens or residents. Veterans living in the Philippines were allotted $9,000 each.

Heck’s bill amends the requirement that veterans applying for compensation under the FVEC be on the Missouri list. This list, called the Approved Revised Reconstructed Guerilla Roster, is kept by the National Personnel Records Center in St. Louis, Missouri.

In addition to their names being on the list, veterans claiming compensation are also required to possess certified documentation from the United States Army.

In an earlier interview Heck told Asian Journal, “If there is an individual who already has papers showing proof of service to the military, why are they denied compensation?”

A reintroduction of the congressman’s bill in the new Congress this February, meanwhile also coincides with the local celebration of Filipino-Veterans Fairness Day in Las Vegas on February 3.

In January 2012, Las Vegas Mayor Carolyn Goodman signed a proclamation that “asks all citizens to honor the denied Filipino World War II veterans and the organizations working to have them recognized for their service to America.”

She noted that there are over 100,000 Filipino-Americans who have contributed to the growth of Las Vegas, which is also the home of six “World War II denied Filipino Veterans.”