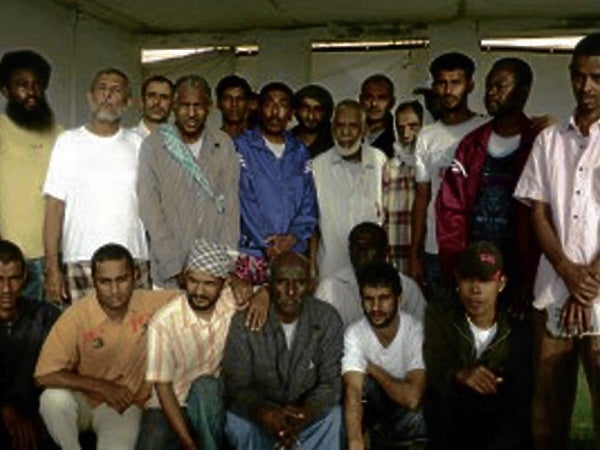 Gerald Gonzales (seated in front, with cap) poses with other crew members of Iceberg I. COURTESY OF mphrp.org and susanople.com

This is the story of 31-year old seafarer Gerald Gonzales from Iloilo City.

He holds the record for being the longest held Filipino hostage in Somalia. 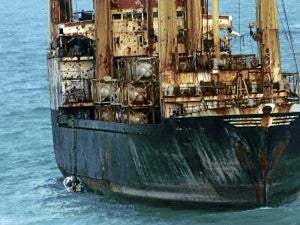 Iceberg 1 had a 24-man crew led by a 61-year old Yemeni captain. It was sailing from Yemen to Dubai when pirates aboard speedboats went after the ship, using heavy artillery to force the ship to ground to a halt.

According to Gerald, he was sleeping below deck when the fire alarm went off at 8 a.m. He was assigned to the night shift, which meant he only had three hours of sleep when the pirates attacked. Bleary-eyed, Gerald dragged himself out of his bunk bed and proceeded to the engine room where a shipmate told him that pirates were trying to board the ship.

At first, Gerald thought of hiding in the engine room till the commotion was over. When gunshots continued, he decided to go up the deck and find out for himself what was going on.

The chief engineer who was at the helm of the ship had already abandoned his post upon seeing a gun with a rocket propelled grenade aimed at him. The pirates used a handmade ladder to climb the ship with guns and ammo slung across their shoulders.

“The pirates were young. One of them was only 10 years old. The child-pirate was apparently being trained by the older boys,” Gerald recalled. They would guard the ship for close to three years, taking turns in shifts of 9-13 people. From time to time, the crew would hear shouting matches as the pirates negotiated ransom with the ship owner.

How cruel were the pirates? Very cruel, the lone Filipino crew member said. “They hung  our ship captain from one leg to the mast, and left him upside down for hours. They sliced off the ears of our chief engineer. Both were sent to their individual quarters and they stayed there for more than two years without sunlight, without companionship.”

During the first three to six months, the crew were physically okay because the ship had enough food and water provisions for everyone. When the cupboards emptied, they had to rely on the generosity of the pirates. Hunger was their constant companion.  The pirates fed them twice a day, but irate at having a bullet-riddled, grounded ship, the Somalis decided to reduce this further to once a day. The crew members took to sleeping more and more as their food intake became less and less.

The ship’s mess hall was converted into a room where all 22 crew stayed and slept. The captain and chief engineer were kept locked in their individual quarters throughout the hostage crisis. 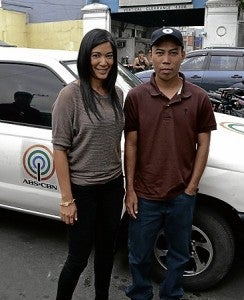 Finally home, he poses for an arrival picture with ABS-CBN’s Pinky Web. COURTESY OF mphrp.org and susanople.com

While all these were going on in Somalia, Gerald’s mother, Aurora, flew to Manila from Iloilo City to seek the help of the Blas F. Ople Center. We arranged meetings for her with foreign affairs officials. Our nearest embassy to Somalia was in Kenya. The post was instructed to do what it could to help coordinate Gerald’s release with the international maritime forces.

Gerald said the most difficult period of his ordeal was when the crew saw other ships that were hijacked nearby moving away within three months or less. “More than 11 ships,” he counted. Usually they were set free in three months. Kami nandoon pa rin. Di na ako tumitingin sa kalendaryo. Parang walang tumutulong sa amin. (But we were still there. I stopped looking at the calendar. It seemed nobody was helping us). ”

Twice, he thought of escaping. It was his shipmates who cautioned him against it. Even if he managed to leave the ship, they said, the Somali desert awaited him and other gangs would likely just hold him captive or else, kill him.

The Somali pirates brought herbs on board that they would chew. “It’s like a drug,” Gerald recounted. The more they chew, the more they would mellow. Somali music played in the background when they did  this. More dangerous were the times when the pirates felt bored or frustrated. “They would take out their guns and just shoot, aiming at the ears of the crew. It’s a blessing that none of us were hurt when the pirates did this.”

The pirates were angry and frustrated because Iceberg 1 could no longer sail. It had too many holes and the engine was not working. Anchored a few feet from shore, the pirates were mad because they were not able to use Iceberg 1 to chase after other cargo ships. Also, negotiations with the ship owner was not going anywhere.

A Yemeni national decided to jump ship in a bid to escape. The crew was unaware that this happened. They only saw the pirates dragging in his dead body. No one else followed his example. The weeks turned into months, months into years. Gerald thought that the world has forgotten the officers and crew of Iceberg 1.

On Dec. 10, speedboats approached Iceberg 1 with members of the Puntland Maritime Forces. One of the speedboats had a long, makeshift ladder that they planned to use to climb the ship while allies, including a sniper stationed on land and a helicopter hovering above the ship, provided air cover. The ladder broke into pieces when the speedboat managed to come near the ship.

From Dec. 10 to Dec. 22, pirates and maritime forces exchanged fire. The crew were in their quarters, lying head down, praying not to be hit by the continuous spray of bullets. “Even at night, we would wake up to the sound and smell of gunfire,” Gerald remembered.

A reinforcement team of six pirates tried to board the ship but two of them were shot dead by snipers onboard the helicopter. A deal was offered to the head of the Somali pirates: “leave the hostages behind and we won’t run after you.” The pirates left the ship and were not followed.

Hours after the rescue, members of the crew were being picked up by their respective governments. “India sent a private plane to bring its nationals home. The others were met by their embassy representatives. I was still alone.”

Gerald stayed with the Puntland Maritime Forces in their camp for another 48 hours. A United Nations team flew him to Kenya for turn-over to the Philippine Embassy. Christmas passed. It took three more days to secure his airplane ticket home. From Kenya, Gerald flew home via Dubai.

Inter-World manning agency welcomed him at the airport together with a representative of the Department of Foreign Affairs and the Overseas Workers Welfare Administration. A connecting flight brought him home to his mother, Aurora.

Recently, Gerald visited the Ople Center and shared with me his story. It was a story of courage and faith by a lone Filipino seaman held captive in Somalia from March 2010 to December 2012 (roughly 1000 days). He recalled the moments when he would pray hard not just for himself but for the family that was waiting for him to come home.

The International Transport Federation which recently opened its office here in Manila, promised to help Gerald with back wages dating back to the time the was hired. Throughout his ordeal, his family never got an allotment. His salary was never given. Gerald’s battle continues, but this time on the labor front. The ship owner, an Emirati national named Yasser Ali, and his manning agency led by Ryan Calzada, must ensure that Gerald receives the compensation owed him, and all insurance benefits due him.

Gerald is now resting in Iloilo City. I asked him about his future plans. “I still want to be a seafarer,” he replied. But next time, he said, he would be more careful in choosing the shipping company to work for.