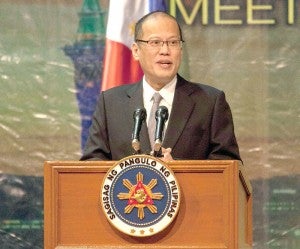 Speaking on the sidelines of the World Economic Forum in Switzerland, Aquino said the two Scarborough Shoal incidents had led to Manila seeking United Nations arbitration this week over the territorial dispute.

Aquino, who did not say when the incidents occurred, said “Chinese vessels” approached to within nine meters (10 yards) of a Filipino fishing boat near the shoal.

“While they (Chinese vessels) were approaching, their horns were supposedly blaring at full blast, causing apprehension to our fishing vessel,” he said, according to a transcript released by the government on Saturday.

A second Filipino boat was driven out by Chinese vessels shortly after it took shelter near the shoal, he added.

“According to the affidavit (crew’s depositions), they were told to go back to the rough waters.”

The shoal, located closer to the Philippine island of Luzon than the Chinese mainland, has been a source of friction since April last year when Chinese vessels stopped the Philippine Navy from arresting alleged Chinese poachers.

Aquino, saying only that the incidents were the latest in a series of assertive Chinese actions in the area, stressed the Scarborough Shoal — which Manila calls “Bajo de Masinloc” and China calls “Huangyan island” — and its surrounding waters are part of the Philippines’ “exclusive economic zone”.

China claims most of the West Philippine Sea, including waters and islands close to the shores of its neighbours.

Foreign Secretary Albert del Rosario however this week said Manila had taken China to a UN tribunal to challenge its claim to most of the sea, including territory belonging to the archipelago, and would ask the arbitration panel to declare Chinese claims in the area invalid.

Aquino said he could not allow China to claim “effective control over Bajo de Masinloc by ordering our vessels out”, as this could encourage Beijing to move into the Philippine-claimed and allegedly resource-rich Reed Bank.

China’s embassy spokesmen could not be reached for comment Saturday.