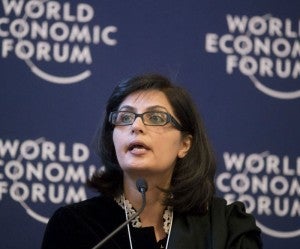 Founder and President of Heartfile, Pakistani Sania Nishtar, speaks during a debate on religion at the 43rd Annual Meeting of the World Economic Forum, WEF, in Davos, Switzerland, Friday. AP

DAVOS, Switzerland—Who created Davos, and why does it exist?

Questions about God and religion were rife at the World Economic Forum in the Swiss resort of Davos this year — providing a philosophical break from the more temporal concerns that tend to dominate the annual gathering of business and political leaders.

“Religion is more relevant now than ever,” asserted Rabbi Pinchas Goldschmidt, a leader of the Russian Jewish community.

Studies around the world show conflicting trends: while Christianity and Islam are showing steady growth in developing countries, the number of people who identify with no religion is on the rise in the richer world.

Why believe in explanations that lack evidence, and obsess about a book written by ancients who “didn’t know about the revolution of the Earth around the sun,” Krauss asked.

Narkis Alon, a youthful Israeli social activist on the same panel, countered that the religious instinct in essence required no particular proof.

“For me religion is the connection to something higher,” she said.

Sister Carol Keehan, head of the Catholic Health Association, a group representing more than 600 hospitals around the United States, noted that people all over the world have a need to believe in a higher power.

An analysis of more than 2,000 polls, census and other data by the Pew Forum on Religion & Public Life found that 84 percent of the world’s 6.9 billion people identified with a religion as of 2010. Christians were the largest group with 2.2 billion, followed by Muslims with 1.6 billion.

However, the study also found about one-in-six, or 1.1 billion people, have no religious affiliation, making them the third-largest group after Christians and Muslims. The unaffiliated mostly live in Asia, with a majority in China, where the government controls official churches.

The debate at Davos reflected a widening gulf within and among nations between the deeply devout and those who identify with no faith.

The conflicts can be seen in recent lawsuits in Italy over displaying crucifixes in public schools and another in the UK where a marriage counselor cited his religious beliefs when refusing to work with a same-sex couple. Both cases reached the European Court of Human Rights.

In the United States, Americans with no religion are becoming as important a constituency to the Democratic Party as religious conservatives are to the Republican Party. The “nones,” who overwhelmingly support abortion rights and gay marriage, comprise about a quarter of voters who are registered as Democrats or lean toward the party.

Roman Catholic and other religious conservatives have found themselves on the losing side of culture war battles that a few decades ago they could have won. Gay marriage has been legalized in Belgium, Spain, Canada, Portugal, Argentina and other countries.

Standouts remain, not least in Russia, where 20 gay rights campaigners and militant Orthodox Christian activists were arrested Friday in Moscow near the Russian Duma as it overwhelmingly backed a bill that would ban “homosexual propaganda.”

In Israel, there is a protracted culture war between secular and ultra-Orthodox Israelis, especially in Jerusalem.

Within religions, clergy are facing a crisis of authority caused in part by the Internet. Rank-and-file believers are as likely to turn to Google for information about faith as they are to seek guidance from recognized scholars.

The issue has been especially vexing in the fight against Islamic extremism. Muslim religious edicts, or fatwas, have proliferated across the Internet, along with YouTube video lectures, where dangerous teachings are presented as mainstream religious thought.

In response, many religious groups have been beefing up their online presence, holding lectures and worship services on Facebook and other platforms that include live chats with pastors, study of scriptures and virtual baptisms conducted via Skype.

In a study tracking freedom of religion worldwide over three years, Pew found that three-quarters of the world’s population live in countries with tight government restrictions on religious expression.

In Pakistan, Islamist groups have pushed through laws that marginalized Christians and other religious minorities. In Egypt, where the Coptic Christian minority has persistently faced discrimination, violence has flared more frequently between Christians and Muslims following the Arab Spring uprisings. Radical Islamists are behind deadly violence in Mali, Nigeria, the Philippines and elsewhere.

At several of the Davos meetings, speakers debated the consequences of the rise of political Islam across the Middle East as a result of the Arab Spring. Is there something in Islam that is antithetical to liberal values? Definitely not, insisted former Arab League secretary-general Amr Moussa and Turkish foreign minister Ahmet Davutoglu; these are distortions of Islam.

Mohammed Ashmawey, head of an Islamic charity, argued that faith-based charities were behind much of the health care system in his native Egypt.

He drew support from Rabbi David Saperstein, a Reform Jewish leader from the United States, who acknowledged that religion was a force for bad as well as good.

On balance though, he said it was “immensely positive.”

Sania Nishtar, a Pakistani health care activist, almost jumped out of her seat.

“The interplay of religion and politics is very exploitative,” she said.

She argued that religion was behind the absence of family planning in much of the developing world and that clerical objections were raised against even vaccinations.

Like much of the discussions at Davos, this one yielded mostly an agreement to disagree.

Krauss, a militant secularist, said he was open to tweaking his views.

If the stars realigned in the night sky to spell out the words “I am here,” Krauss said he would reassess.