US Navy must pay for breaking PH laws–Aquino 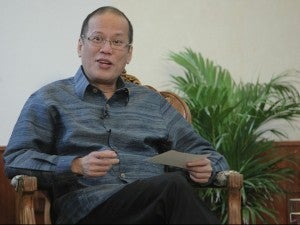 DAVOS, Switzerland—“Excuse me, we sustained damage. Do we leave it at that?”  President Aquino said on Friday.

The United States Navy will be held answerable under Philippine laws for the damage caused by the grounding of a US 7th Fleet warship in Tubbataha Reefs, Mr. Aquino said.

Talking with Filipino reporters after the World Economic Forum meeting here, Mr. Aquino said he had ordered Transportation Secretary Joseph Emilio Abaya to investigate the grounding of the minesweeper USS Guardian in the Unesco-World Heritage protected area in the Sulu Sea on Jan. 17.

The Philippine government’s priority, however, is to remove the ship from the reef to prevent further damage to the marine environment.

“How did they actually get into a protected area? How did their navigation systems, [supposedly among the most sophisticated in the world], fail?”  Mr. Aquino said.

Asked whether the apology issued by the US government would suffice, the President said it only showed that the United States respected the Philippines as a sovereign state and was “very careful” about its sensitivities.

“But that doesn’t exempt them from having to comply with our laws,” Mr. Aquino said.

The Avenger-class USS Guardian, a 63-meter, 1,300-ton mine countermeasure vessel belonging to the US 7th Fleet, ran aground on the south atoll of the Tubbataha Reefs  while sailing to Indonesia after making a port call at Puerto Princesa in Palawan.

US officials have apologized for the accident and the damage it has caused to the Tubbataha Reefs, which the Philippines considers a national treasure.

But for President Aquino expressions of regret, while appreciated, are nearly not enough, as the US Navy has caused such a big mess and the violation of Philippine laws cannot be ignored, even for the sake of friendship.

“Our laws are very specific,” Mr. Aquino said. “When they got the diplomatic clearance to pass through our waters, this is a recognized, internationally recognized zone, that is, like an exclusive zone. They violated it. There are penalties.”

But the process will come in stages. The top priority, Mr. Aquino said, is to remove the stuck ship and then to assess the damage.

At the same time, the President said he would like to know how the accident happened so that measures could be taken to prevent repetitions.

“But the other thing is the damage, the fines that will be levied,” Mr. Aquino said.

Why are you there?

Philippine environmentalists and lawmakers have demanded to know why the warship proceeded to enter the marine park, 128 kilometers from Puerto Princesa, despite warnings from park authorities that it was entering a restricted area.

The US Navy said a navigational map that misplaced the Tubbataha Reefs or possible errors in the Guardian’s navigational system caused the ship to stray into the protected area, famous for its magnificent marine life and coral that rival Australia’s Great Barrier Reef.

Strong winds and big waves have been tossing the vessel around for days, damaging 1,000 square meters of reef, according to the Philippine Navy and environmental officials.

Philippine and American authorities have decided to remove the Guardian by lifting the badly damaged ship off the water and loading it onto a barge.

Two heavy lift ship-borne cranes are arriving from Singapore at the end of the month to remove the vessel and take it to a shipyard somewhere in the region for repairs.

The US Navy has finished defueling the Guardian, with a Malaysian tugboat, the Vos Apollo, removing 57,000 liters of diesel fuel from the ship on Friday.

The salvage operation is expected to start, at the earliest, Feb. 1.

Transportation Secretary Abaya, a graduate of the US Naval Academy at Annapolis, Maryland, said earlier that the Philippine government would lodge a complaint for damages.

Angelique Songco, the marine park superintendent, said the damage to the reef could not be assessed until the ship was removed. But the Philippine government, she said, imposes a fine of $300 for every square meter of damaged coral.

In 2005 the environmental group Greenpeace was fined nearly $7,000 after its ship struck coral in Tubbataha.

While apologizing for the mess caused by the Guardian, the US government has said nothing about paying for the damage to the reef.

As usual, after the eruption of a controversy involving Americans, left-leaning groups are calling for a review of the Philippines’ Visiting Forces Agreement (VFA) with the United States.

Asked about it, Mr. Aquino replied, “What does the VFA have to do with the Americans’ going to Tubbataha? There are no [joint military exercises there]. [T]his is really a question of violating certain ecological laws that we already have in the books.” With a report from Tarra Quismundo