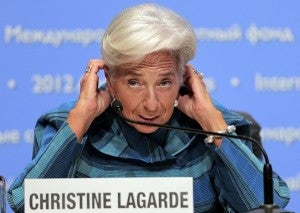 DAVOS, Switzerland—He missed her courtesy call during her trip to Manila last November, but President Aquino made it up to International Monetary Fund (IMF) managing director Christine Lagarde on the sidelines of the World Economic Forum here.

The meeting between the President and Lagarde also happened after the IMF had upgraded its growth forecasts for the Philippines for this year and 2014 while tempering its outlook for the rest of the world.

Mr. Aquino and Lagarde exchanged pleasantries for about 40 minutes on Thursday night. Mr. Aquino received Lagarde, considered one of the most influential women in the world, in the chalet that served as the President’s official residence here.

The IMF’s higher growth forecasts of 6 percent this year and 5.5 percent next year for the Philippines represent a substantial upgrade from its earlier forecast of 4.8-percent growth for both years.

“They said that based on their analysis, things were looking very positive for the Philippines and that they were confident that the growth targets could be attained, given the momentum that we‘ve had,” Communications Secretary Ricky Carandang said in a briefing for Filipino reporters.

The President also discussed with Lagarde some of the Philippines’ iniatives to pump-prime growth, including prudent government spending and easing regulations to encourage foreign investment.

President Aquino thanked Lagarde for her confidence in the Philippines, Carandang said.