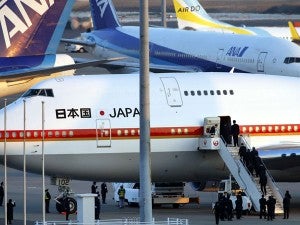 TOKYO—The seven Japanese survivors of the Algerian hostage crisis, and nine of the 10 dead, arrived back in a shell-shocked Japan Friday as the prime minister spoke of the nation’s “deepest grief”.

Emotional reunions away from the glare of publicity awaited those who made it out of the In Amenas complex alive, amid a renewed national sense of the perils of doing business in resource-rich, but unstable parts of the world.

A government-owned plane with its national flag livery touched down at Haneda Airport as a warm orange sun rose over Tokyo.

Airport officials used black umbrellas to shield those getting off the plane from the glare of cameras feeding blanket media coverage in a country baffled by what happened half a world away.

Foreign Minister Fumio Kishida stood alongside officials from engineering firm JGC, which employed — directly or indirectly — all Japanese caught up in the siege, bowing deeply after the coffins were brought out from the plane’s cargo hold.

Three trailers, each carrying three coffins, lined up near the plane’s tail as the assembled dignitaries laid on them bouquets of white flowers, a common offering for the deceased in Japan.

Tokyo on Thursday said it had now accounted for all ten men who had been out of contact since Islamist gunmen stormed the desert gas plant over a week ago.

Dozens of foreigners, including eight Filipinos, were killed during a four-day standoff that ended in a bloody showdown with Algerian commandos on Saturday, with reports of summary executions.

Japan’s body count of 10 is the highest of any nation whose citizens were caught up in the crisis in the Sahara and an unusual taste of Jihadist anger for a country that has remained far from US-led wars in the Muslim world.

Prime Minister Shinzo Abe, at a meeting of his senior ministers on Friday, said the nation was in mourning for those killed.

“As a government, we again express our deepest condolences for the pain of the bereaved families,” he said.

“It is with deepest grief we have learned that 10 Japanese nationals who worked on the frontlines of international business have become casualties.”

At the headquarters of JGC, mourners continued to pay respects in front of a makeshift altar.

A steady stream of visitors dressed in black solemnly bowed to a Buddhist cenotaph, as they urged departed souls to find peace.

An elegantly handwritten prayer for those who lost their lives was inscribed on a wooden tablet, around which lay bouquets of white flowers.

The loss of so many colleagues is a heavy blow to JGC in a country where corporate communities are close-knit and company loyalties remain strong.

“Our grief is heartbreaking,” he said, in remarks that were televised live nationwide.

“We have lost ten magnificent staff. Our task now is to push forward the engineering business of which we are all so proud and ensure absolutely the safety of our staff, the most valuable assets a company has.”

Tatsuhiro Hayashi, the president of a consulting firm that does business with JGC, said he was full of sorrow.

“Accidents happen every day, but I was shocked to hear that terrorism actually affected us,” Hayashi told Agence France-Presse.

“I’m afraid that this incident could lead to growing fears among people, especially families of Japanese workers overseas.”

At least 37 foreign hostages were killed in the siege according to a preliminary death toll, as well as one Algerian hostage. Several people are still missing and some bodies have not yet been identified.