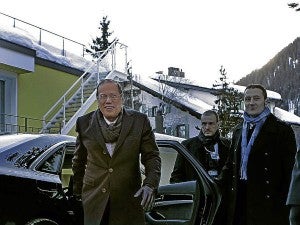 COLD WEATHER BUT WARM WELCOME President Aquino is met by Philippine Embassy officials and staff upon his arrival at the Alteinstrasse 2A (President’s Chalet) on Thursday for the World Economic Forum (WEF) in Davos Klosters, Switzerland. The President is scheduled to address the WEF’s activity on “Anti-Corruption Reception” hosted by the partnership against corruption. RYAN LIM/MALACAÑANG PHOTO

DAVOS—President Benigno Aquino III arrived in this wintry skiing resort hub Thursday morning (Swiss time), joining around 50 fellow heads of state for the annual meeting of World Economic Forum, seen as a platform for the Philippines to strengthen its ties with the rest of the world.

Aquino arrived at 6:38 a.m. Swiss time (1:38 p.m. Manila time) on Thursday at the Zurich international airport via chartered Philippine Airlines flight PR001. Following a simple arrival ceremony, the President went on a two-hour road trip to the highlands of Davos to begin his working visit.

Other members of the 63-member Philippine delegation, including Communications Secretary Ramon Carandang and Budget and Management Secretary Florencio Abad, had flown in ahead of the President’s arrival.

For the first day of his three-day visit to Switzerland on Thursday, Aquino was set to meet with International Monetary Fund managing director Christine Lagarde and speak before a private WEF session tackling anti-corruption initiatives. A previously scheduled meeting with officials of German car manufacturing giant Volkswagen did not push through.

“There was a scheduling conflict and the Volkswagen officials were not able to fly in as planned but they will have a chance to speak to the President before we leave Davos,” Carandang said.

“Isang pagkakataon po ito upang mailatag natin sa harap ng mga pinuno sa Europa at iba pang mga bansa ang malawakan at makabuluhang reporma na lumalaganap sa ating bayan. Bibigyang-mukha natin ang magagandang balitang nasasagap nila mula sa mga banyagang telebisyon at pahayagan, at ipapaliwanag kung paano natin napapa-arangkada ang ekonomiya bunsod ng tuwid na pamamahala (This is one opportunity for us to present before the leaders of Europe and other countries the comprehensive and substantial reforms done in our country.  We’ll bring a human face to the good news they have received from foreign television and newspapers and explain how we have perked up the economy on the back of good governance),” Aquino said in a speech shortly before he boarded the flight to Zurich.

The President’s visit to Switzerland is his first since he assumed office in June 2010.

WEF is an independent international organization committed to improving the state of the world by engaging business, political, academic and other leaders of society to shape global, regional and industry agendas.  The theme of the 43rd World Economic Forum Annual Meeting is “Resilient Dynamism” given various challenges faced by the global economy.