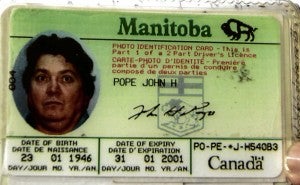 DEADLY RAGE Police probers find an old ID of Canadian John Pope who went into a deadly rage at the Cebu Palace of Justice on Tuesday. LITO TECSON/Cebu Daily News

CEBU CITY—A lingering dispute in the neighborhood ended in violence Tuesday in a courtroom when a Canadian retiree charged with malicious mischief gunned down his accuser and a lawyer before killing himself, police said.

Minutes before the start of a hearing at 8:30 a.m. at the Municipal Trial Court in Cities (MTCC) Branch 6, the gunman, identified as John Pope, shot and killed Dr. Rene Rafols, 57, and the physician’s lawyer, Juvian Achas, 59.

As the retired journalist, aged between 65 and 67,  was heading down the building, he shot Assistant City Prosecutor Maria Theresa Casiño, 40, who was hit in the head below the ear. She was reported fighting for her life in the hospital. Casiño was the prosecutor assigned in MTCC Branch 1 where Pope had another pending case.

Police said Pope, wearing a white sweatshirt and jogging pants and armed with two handguns, then proceeded to the ground floor to look for three more prosecutors but they were not in their offices.

As Pope was leaving the Palace of Justice, he was shot in the legs by two policemen who were to attend a hearing. But before he could be taken in, Pope shot himself in the head, according to the officers. Pope died a few minutes later in a private hospital where he was brought.

A check with the Bureau of Immigration in Cebu showed that Pope was a retiree visa holder and had been a resident of Cebu City for 14 years.

A former neighbor, who asked not to be named, said that sometime in mid-2000, Pope owned a condominium unit at Residenza Tuscania while Rafols lived in a townhouse inside the same residential compound at Barangay (village) Guadalupe in Cebu City.

Rafols was then association president when Pope approached Rafols to complain about “something so crazy, so miniscule.”

But Pope reportedly got mad when Rafols didn’t act on his complaint. During an association meeting, Pope complained that someone would knock on his door but when he opened it, no one was around.

The source said Pope told the association that he suspected Rafols was the one annoying him.

To appease him, the association posted a guard outside his unit but Pope still complained that the knocking continued.

A source said Pope would stone the townhouse of Rafols, who maintained he never knocked on the door of the Canadian’s condo unit.

“They met at least three times in the barangay hall but their dispute was never settled. So the barangay issued a certification to file action,” he told the Philippine Daily Inquirer.

The complaints were filed  in two branches of MTCC.

A female friend of Rafols said the physician told her husband that Pope had continued to harass him and had even pointed a gun at him inside his clinic.

She said the association filed a complaint in the Canadian Consulate Office in Cebu but was told that a personal dispute was best left to authorities.

When reached through phone, Canadian Consul Robert Lee declined to comment on instructions of the Canadian Embassy based in Manila.

It was learned that Pope had a pending case of violence against women and children in the Regional Trial Court reportedly filed by the Canadian’s former live-in partner. Pope was out on bail.

A case of illegal possession of firearms had been dismissed.

About 8:20 a.m. on Tuesday, Rafols and his lawyer, Achas, were at the MTCC Branch 6 to attend the hearing of the malicious mischief case.

Lawyer Eduardo Rosello said that while waiting for Judge Pamela Baring-Uy to emerge from her chamber and start the morning hearings, he saw Achas and Rafols inside the courtroom.

He said he greeted Achas who introduced Rafols to him. They even engaged in small talk.

At that time, Pope walked casually inside the courtroom and then went directly behind the victims and shot them at close range. With reports from Ador Mayol, Inquirer Visayas, and Christine O. Avendaño in Manila