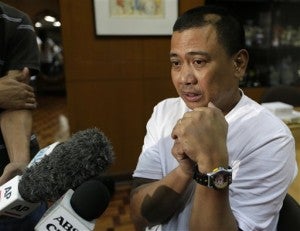 Joseph Balmaceda, one of the four Filipino oil field workers who was wounded but survived the terrorist attacks of an oil field in Algeria, talks about his ordeal shortly upon arrival at the Overseas Workers Welfare Administration in Manila, Philippines Monday Jan. 21, 2013. In a separate briefing by the Department of Foreign Affairs, Spokesman Raul Hernandez said six Filipino workers were killed and four more are still unaccounted for. AP Photo/Bullit Marquez

Islamic militants used foreign hostages as human shields to stop Algerian troops aboard helicopters from strafing them with gunfire. This was the account of survivor Joseph Balmaceda who arrived in Manila Monday.

Six Filipinos were confirmed killed while four remained missing in the bloody conclusion of the four-day hostage crisis in Algeria that reportedly killed 81.  Details on the cause of their deaths remained hazy, the Department of Foreign Affairs  (DFA) said Monday.

Assistant secretary and DFA spokesperson Raul Hernandez said 12 other Filipino workers who were at the Ain Amenas gas field at the time of the siege had been accounted for and are awaiting repatriation to the Philippines.

Al-Qaeda-linked militants attacked a gas plant deep in the desert of Algeria and took scores of foreign workers hostage last week in retaliation for French military operations in neighboring Mali. Algerian armed forces stormed the plant on Saturday in a siege that left at least 81 dead.

“[The deaths of the Filipinos] were a direct result of … the incident that happened in the Ain Amenas gas field. Many of [them] were actually rescued, but the people who died, that was the result of explosions and gunshot wounds,” Hernandez said in an interview.

Balmaceda, a father of four, said he saw one Japanese hostage draped with explosives, while he and others had their hands bound with cable ties, during their ordeal that ended on  Saturday.

“Whenever government troops tried to use a helicopter to shoot at the enemy, we were used as human shields,” a clearly stressed Balmaceda told reporters.

“We were told to raise our hands. The government forces could not shoot at them as long as we were held hostage,” he added.

Balmaceda, nursing abrasions on  his face and a loss of hearing, said he was the only survivor out of nine hostages who were aboard a van that exploded, apparently from C-4 explosives that the militants had rigged to the vehicle.

He said two militants were transferring the nine hostages to the central facility of the gas plant, but the bomb went off during a clash with Algerian security forces.

“The only thing left of the car was the back portion of the Land Cruiser,” said Balmaceda, 42.

“I was the only one who survived because I was sandwiched between two spare tires. That is why I am still here and can talk to you.” Balmaceda said the two militants driving the vehicle were also killed.

When other hostage-takers started firing at him, Balmaceda said he “crawled about

300 meters to where the government forces were. And when I reached them I fainted. When I woke up I was in the hospital.”

Most hostages were freed on Thursday in a first Algerian rescue operation, which was initially viewed by foreign governments as hasty, before the focus of public condemnation turned on the jihadists.

Balmaceda said the incident in which the vehicle exploded occurred on the second day of the siege, apparently during the first rescue operation.

The crisis ended on Saturday with a final assault by Algerian troops.

Hernandez said the government was “getting a clarification about the deaths of the Filipinos … as it was still unclear whether they were hit by friendly fire or enemy bullets or explosives.”

The DFA was withholding the names of all Filipinos involved, as it was still in the process of informing their relatives about their condition, he added.

“The DFA is now in the process of notifying the next of kin of the six confirmed dead and coordinating the shipment of their remains, while locating the whereabouts of the four unaccounted for,” Hernandez said.

The official said the Algerian government, through its Ministry of Foreign Affairs’ director general of Asia-Pacific affairs, has sent its condolences to the Philippine government and the families of those killed.

“He also emphasized to our chargé d’affaires Jun Duenas, who is leading our team in Algeria, that his government took military action and did everything possible to prevent further loss of life … when it was confirmed that the terrorists [had] started executing the foreign hostages,” the DFA official added.

A total of 26 Filipinos are employed at the Ain Amenas gas field that was attacked by militants on Wednesday, but only 22 were on site at the time of the incident as four had already gone home to the Philippines on vacation, Hernandez said.

Of the 12 who survived, four are undergoing treatment at  Al-Azhar Clinic in Algiers on their employers’ account. Four are resting at the Mercure Hotel there, while four are already on their way home, he added.

The DFA had earlier repatriated 39 other Filipinos employed in Algerian gas fields, assisted by a DFA team sent from the Philippine Embassy in neighboring Libya.

A total of 1,780 Filipinos are employed either as semiskilled or highly skilled workers across Algeria, Hernandez said. With a report from AFP