US vows to help assess damage to coral reefs 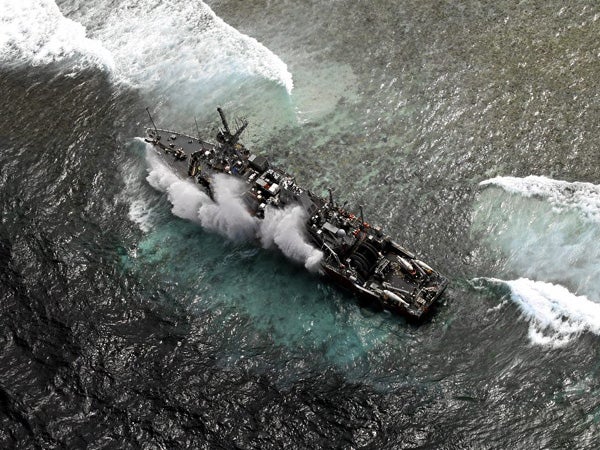 This handout photo taken on January 19, 2013 and released on January 20, 2013 by the Philippine Western Command (WESCOM) shows an aerial shot of US Navy minesweeper, the USS Guardian, as it remains trapped on the Tubbataha reef after it ran aground on the western Philippine island of Palawan.  AFP PHOTO/WESCOM

Manila, Philippines – The United States said it will continue to work with the Philippine government as it apologized for any damage that its minesweeper has caused when it ran aground  the Tubbataha Reef off Palawan last week.

“When the Guardian is safely recovered by the U.S. Navy, the U.S. government will continue to work with the Republic of Philippines government to assess the extent of the damage to the reef and the surrounding marine environment caused by the grounding,” the US Naval fleet said Sunday in its official website.

“The Republic of the Philippines government was promptly informed of the incident and is being updated regularly by U.S. officials,” it added.

Vice Admiral Scott Swift, commander of the US Navy’s 7th fleet, also  apologized for the incident.

“As a protector of the sea and a dailor myself, I greatly regret any damage this incident has caused to the Tubbataha Reef,” Swift said in the same statement from the website.

“We know the significance of the Tubbataha Reefs Natural Park and its importance as a World Heritage Site. Its protection is vital, and we take seriously our obligations to protect and preserve the maritime environment,” he added.

The US Navy has sent 10 American divers to assess the situation and two private salvor ships to try to extricate its US Warship, the USS Guradian, which ran aground before dawn Thursday last week.

“Carney will embark the destroyer USS Mustin (DDG 89), which along with several other U.S. Navy support vessels, is focused on preventing any further environmental damage to the reef and surrounding marine environment,” he swift.

Swift noted that the condition of the ship had not changed but that there were no traces of an oil slick in the area.

Philippine officials and environmentalists have expressed strong concern that the extraction may cause more damage to the reef, as the 688-meter ship was lying on some 10 meters of coral.

The US warship docked at the former American naval base in Subic Bay on January 13 for routine refueling, resupply, and rest and recreation. It was scheduled to make a brief stop at Puerto Princesa before heading off to its next port call in India when it grazed the reef and got stuck 128 kilometers off Palawan.

The US Navy initially blamed a faulty map used by the minesweeper that misplaced the location of the Tubbataha Reef.