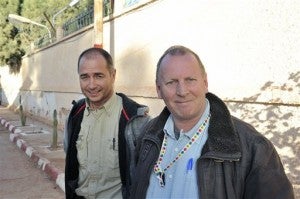 Two British hostages Peter, left, and Alan (no family name available) are seen after being released, in a street of In Amenas, near the gas plant where they had been kidnapped by Islamic militants, Saturday, Jan. 19, 2013. Governments scrambled Sunday to track down missing nationals after the bloody end to a gas plant siege that saw Islamists kill 23 foreign and Algerian hostages. AP PHOTO/ANIS BELGHOUL

IN AMENAS, Algeria—Governments scrambled Sunday to track down missing nationals after the bloody end to a gas plant siege in the heart of the Algerian Sahara that saw Islamists kill 23 foreign and Algerian hostages.

Japanese engineering firm JGC Corp. said 10 of its Japanese and seven of its foreign workers remained unaccounted for. Five Britons and one UK resident are also either dead or still missing.

JGC confirmed the safety of 61 of its 78 workers at the In Amenas facility in the desert that was stormed at dawn on Wednesday by militants from “Signatories in Blood,” a group demanding an end to French military intervention in Mali.

“But the safety of the remaining 10 Japanese and seven foreign workers is yet to be confirmed,” a JGC spokesman said in Tokyo.

Kuala Lumpur said JGC had told it one of two Malaysians still unaccounted for is dead while the fate of the other was unknown.

Manila said 52 Filipinos caught up in the crisis had been accounted for, but it was still not known whether any others were dead.

Dramatic accounts emerged after Algerian special forces stormed the remote desert facility on Saturday to end a hostage crisis that saw seven foreign hostages killed by their captors in the final moments as the military moved in.

Relatives of Kenneth Whiteside, 59, from Glenrothes in Scotland, were “devastated” after hearing that an Algerian co-worker claimed to have seen him being shot but dying bravely with a smile, Britain’s Mail on Sunday reported.

The mother of one survivor told the Sunday Mirror her son, Stephen McFaul, 36, from Belfast, will be scarred for life.

Forced to wear explosives, he fled when the kidnappers’ convoy he was in came under fire on Thursday.

“He’ll have nightmares for the rest of his life after the things he saw,” Marie said.

Thirty-two kidnappers were also killed in the 72-hour stand-off, and the army freed “685 Algerian workers and 107 foreigners,” Algeria’s interior ministry said on Saturday, although the final toll of the dead and missing remained unclear.

Among the dead were an unknown number of foreigners—including from Britain, France, Romania and the United States.

The kidnappers, whose leader is Algerian Mokhtar Belmokhtar, a former Al-Qaeda commander, first killed a Briton and an Algerian on a bus on Wednesday before taking hundreds of workers hostage when they overran the gas plant.

The apparent leader of the militants on the ground warned in a recording broadcast Saturday that he would blow up the facility if the army got too close.

A security official gave AFP the same death tolls, adding that it was believed the foreigners were executed “in retaliation.”

As experts began to clear the complex of bombs planted by the Islamists, residents of In Amenas breathed a collective sigh of relief.

“The plant could have exploded and taken out the town,” said one resident.

Most of the hostages had been freed on Thursday when Algerian forces launched a first rescue operation which was widely condemned as hasty.

But US President Barack Obama and his French counterpart Francois Hollande said responsibility for the deaths lay with the “terrorists.”

“The blame for this tragedy rests with the terrorists who carried it out, and the United States condemns their actions in the strongest possible terms,” Obama said in a statement.

“In the coming days, we will remain in close touch with the government of Algeria to gain a fuller understanding of what took place so that we can work together to prevent tragedies like this,” Obama added.

At least one American had already been confirmed dead before Saturday’s final assault.

Hollande called Algiers’ response “the most appropriate” given it was dealing with “coldly determined terrorists ready to kill their hostages.”

British Defense Secretary Philip Hammond said the deaths were “appalling and unacceptable and we must be clear that it is the terrorists who bear sole responsibility for it.”

A Colombian employee of BP oil is believed to be among the hostages killed at the gas plant, President Juan Manuel Santos said.

Monitoring group IntelCenter said the hostage-taking was the largest since the 2008 Mumbai attack, and the biggest by jihadists since hundreds were killed in a Moscow theater in 2002 and at a school in the Russian town of Beslan in 2004.

“From their accents I understood one was Egyptian, one Tunisian, another Algerian and one was speaking English or (another) foreign language,” he said after escaping on Thursday.

“The terrorists said: ‘You have nothing to do with this, you are Algerians and Muslims. We won’t keep you, we only want the foreigners.’”

Hollande said French troops would stay in neighboring Mali as long as was needed “to defeat terrorism” in the West African country and its neighbors.