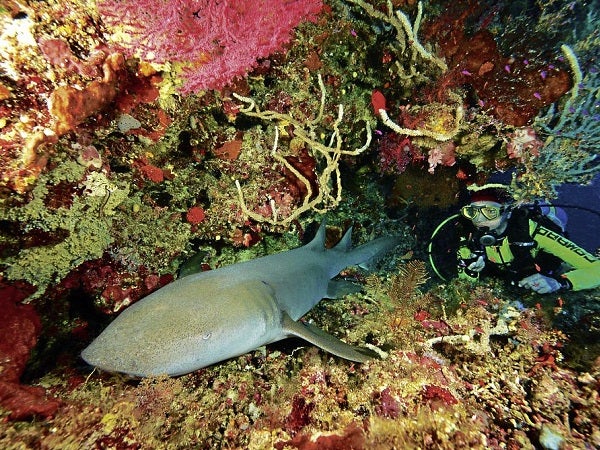 REEFS ON THE ROCKS A diver observes a sleeping shark on a ledge at the Tubbataha Reefs Natural Park. Made up of two atolls, Tubbataha’s vertiginous walls are home to 12 species of sharks. Overfished because of the sharks’ valuable fins, Tubbataha offers one of the last guaranteed shark dives in the world. Although protected year-round by armed rangers who are stationed in two-month shifts, the reefs were defenseless against the rude intrusion of a US minesweeper three days ago when it ran aground in the Unesco-named World Heritage Site. YVETTE LEE/CONTRIBUTOR

The United States Navy said a minesweeper that ran aground on a coral reef in the Philippines was using a faulty map that misplaced the location of the marine sanctuary.

The Navy said digital nautical charts contained inaccurate data and may have been a factor in the Guardian’s grounding.

Navigator of the Navy Rear Adm. Jonathan White released precautionary guidance to all Pacific Fleet ships, saying that “initial review of navigation data indicates an error in the location of Tubbataha Reef” in the Philippines.

The US Navy has sent an assessment team that would plan and execute the delicate extraction of the American minesweeper from the Tubbataha Reef with the least damage on the marine sanctuary where it has been trapped since Thursday, the unit’s Japan-based fleet has said.

Strong winds and waves have pushed the ship to be parallel to the reef line, the Inquirer learned on Saturday.

“If you remember the pictures that came out yesterday (Friday), the ship was still perpendicular to the reef line but because of the winds and waves, which are really strong now, the ship moved some 90 degrees and is now parallel to the reef line,” a source from the military told the Inquirer.

The source, who requested anonymity as he was not authorized to give details to the media, denied news reports that the ship was sinking. “It couldn’t really sink because there’s a reef beneath it,” he said.

Three ships from the Philippine Navy have been deployed as of Saturday morning to the vicinity of the Tubbataha Reef for on-site monitoring and to provide assistance to the marooned ship.

“Our ships are outside the protected area,” said Maj. Oliver Banaria, commander of the military’s Western Command Civil Relations Group.

Banaria said a Philippine Air Force (PAF) Nomad aircraft was deployed Saturday morning to the site for an aerial survey of the USS Guardian and “further assess the situation.”

“The recovery of the ship has not begun yet,” Banaria said.

The forward-deployed US Navy’s 7th Fleet also admitted that the grounding of the 68-meter USS Guardian could have damaged the reef just as the incident spurred a demand among concerned Philippine groups for US accountability over the destruction of what is considered a national treasure.

“Without speculating about this particular case, there are potential risks of damage from physical contact between the ship and the reef or sea floor, and from the effects of material from the ship being introduced into the environment,” Lt. Brian Wierzbicki, a public affairs officer of the 7th Fleet, told the Inquirer.

“We won’t know more until the assessment team arrives on scene,” he said in an e-mail response sent from the fleet’s base in Yokosuka, Japan.

All 79 officers and crew of the US Navy minesweeper stuck on a coral reef in central Philippines have left the ship two days after efforts to free the vessel failed, the Navy said on Saturday.

The US Navy’s 7th Fleet earlier on Friday said 72 of the crew of the USS Guardian were transferred for safety reasons to a military support vessel and a naval survey ship. The Navy said in a statement hours later that all 79 crew members, including the commanding and the executive officers, had left the stricken ship.

The Avenger-class mine countermeasures ship was en route to its next port call following a routine stop in the Philippines when it grazed the reef and got stuck some 128 kilometers off Palawan before dawn on Thursday.

The ship had arrived at the former US naval base on Subic Bay in Olongapo City on Jan. 13 for a routine resupply, refueling and rest and recreation stop and a quick visit to Puerto Princesa before sailing off to its next destination.

Wierzbicki said the Navy was still investigating how the ship, known to be equipped with top-of-the-line navigational equipment, ran aground the reef in the vast Sulu Sea.

“The Navy recognizes that Tubbataha Reef is a unique and treasured environment. The cause of this incident will be thoroughly investigated,” said Wierzbicki when asked for comment on the concern of environment groups on the protected coral reef, designated by the Unesco as a World Heritage Site.

“The full extent of any damage to the reef won’t be determined until the ship is freed from the reef,” Wierzbicki said.

The World Wide Fund for Nature Philippines said that according to an initial visual inspection, the 68-m-long, 1,300-ton Guardian damaged at least 10 m  of the reef. Aerial photographs provided by the Philippine military showed the ship’s bow sitting atop corals in shallow turquoise waters. The stern was floating in the deep blue waters.

Angelique Songco, head of the government’s Protected Area Management Board, said it was unclear how much of the reef was damaged. She said the government imposes a fine of about $300 per square meter of damaged coral.

In 2005, the environmental group Greenpeace was fined almost $7,000 after its flagship struck a reef in the same area.

Songco said that park rangers were not allowed to board the ship for inspection and were told to contact the US Embassy in Manila.

Philippine military spokesperson Banaria said the US Navy did not request assistance from the Philippines.

US Navy ships have stepped up visits to Philippine ports for refueling, rest and recreation, plus joint military exercises as a result of a redeployment of US forces in the Asia-Pacific region.

The Philippines, a US defense treaty ally, has been entangled in a territorial dispute with China in the West Philippine Sea.

The 7th Fleet and the US Embassy in Manila said separately that initial attempts to release the Guardian had been unsuccessful. Wierzbicki said the US Navy’s assessment team, dispatched from Puerto Princesa on Friday, would “assess conditions, assist in salvage operations and develop a recovery plan.”

“Their focus will be to get on board, get a workable plan in place and work to extract Guardian from the reef with as little damage as possible,” Wierzbicki said.

In a separate statement, US 7th Fleet commander Vice Admiral Scott Swift said other support vessels had arrived on scene.

“7th Fleet ships remain on scene and essential Guardian Sailors will continue conducting survey operations on board the ship as needed until she is recovered. Several support vessels have arrived and all steps are being taken to minimize environmental effects while ensuring the crew’s continued safety,” Swift said.

Wierzbicki said 72 of the Guardian’s crew were evacuated on Friday and transferred to MV C-Champion, a Military Sealift Command chartered ship, for their safety.

The embassy said a small team of engineering and bridge personnel will remain aboard the Guardian to work with the assessment team “in an attempt to free Guardian with minimal environmental impact.”

“The remaining seven sailors, which include the commanding officer and executive officer, will also be transferred if conditions become unsafe,” the embassy said.

The embassy said US authorities “are in close communication” with their Philippine counterparts, including the Tubbataha Management Office. With a report from AP