Fate of Filipino, other foreign hostages in Algeria hangs in balance 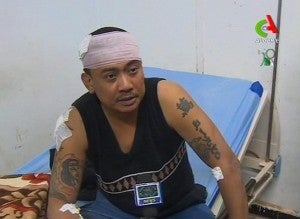 An unidentified rescued hostage speaks to the media in a hospital Ain Amenas, Algeria, in this image taken from television Friday Jan. 18, 2013. Algerias state news service says nearly 100 out of 132 foreign hostages have been freed from a gas plant where Islamist militants had held them captive for three days. The APS news agency report was an unexpected indication of both more hostages than had previously been reported and a potentially breakthrough development in what has been a bloody siege. AP/Canal Algerie via Assiaciated Press TV

IN AMENAS, Algeri–The fate of Filipino and other foreign hostages seized at a gas plant in the Algerian desert hung in the balance on Saturday, as their Islamist captors demanded a prisoner swap and an end to French military action in Mali.

The Al-Qaeda-linked gunmen, cited by Mauritania’s ANI news agency, said they still held seven foreigners at the site deep in the Sahara near the border with Libya.

An Algerian security official put their number at 10, but more workers remain unaccounted for, including at least 10 Japanese and eight Norwegians.

“This is an extremely difficult and dangerous situation,” US Secretary of State Hillary Clinton said at a joint Washington news conference with Japanese Foreign Minister Fumio Kishida as one American hostage was confirmed dead.

“The United States extends our condolences to all the families who have lost loved ones in this brutal assault and we remain deeply concerned about those who remain in danger. Utmost care must be taken to preserve innocent life.”

State Department spokeswoman Victoria Nuland identified the dead American as Frederick Buttaccio amid reports that a total of five Americans were initially taken hostage on Wednesday.

The UN Security Council “condemned in the strongest terms the terrorist attack in In Amenas, Algeria,” in a statement agreed by the 15-member panel.

It expressed “deep sympathy and sincere condolences to the victims of these heinous acts,” and “underlined the need to bring perpetrators, organisers, financiers and sponsors of these reprehensible acts of terrorism to justice.”

International criticism of Algeria’s haste in launching military assault on Thursday to rescue hostages has mounted, after an Algerian security official said 12 hostages and 18 kidnappers were killed in the special forces operation.

French Foreign Minister Laurent Fabius said a Frenchman had been killed, and a US official said an American military aircraft had begun to help evacuate survivors, but gave no estimate of the number of US hostages.

Troops were trying to reach a “peaceful” end to the hostage crisis, before “neutralizing the terrorist group that is holed up in the plant and freeing a group of hostages still being held there,” an Algerian security official said.

The gunmen said they were still holding three Belgians, two Americans, one Japanese and a Briton, although Belgium said there was no indication that any of its nationals were being held.

ANI said Belmokhtar, a veteran Algerian extremist with Al-Qaeda ties who has claimed responsibility for the attack, proposed exchanging the remaining two US hostages for the Egyptian blind sheikh Omar Abdul Rahman and Pakistani Aafia Siddiqui, jailed in the United States on charges of terrorist links.

“The United States does not negotiate with terrorists,” Nuland said when asked about the proposal.

The Algerian national news agency APS quoted a government official as saying the kidnappers, who claimed to have come from Niger, were armed with machineguns, assault rifles, rocket launchers and missiles.

NBC News cited US officials as saying that two Americans escaped unscathed after hiding when the attack began, while the fate of two others remains unclear.

US Defense Secretary Leon Panetta said the United States was “working around the clock” to secure the safe return of Americans.

The wife of one of Filipino captive told Manila radio station DZMM her husband Ruben Andrada was garlanded with explosives and bundled into a truck rigged with bombs as the Algerian army rescue bid took place.

“According to him… they draped a bomb on him, like a necklace,” Edelyn Andrada said. “Luckily, the bomb planted in his vehicle failed to explode. The bombs in the other vehicles went off and so people died.”

A Philippine foreign department spokesman said 34 Filipinos had been evacuated from the gas field and were on their way home.

The fate of two Malaysians believed to have been caught up in the crisis remains unknown, the foreign ministry said in a statement. Three other Malaysians working at the plant were safe.

France said two of its nationals had returned safely but it had no word on two more.