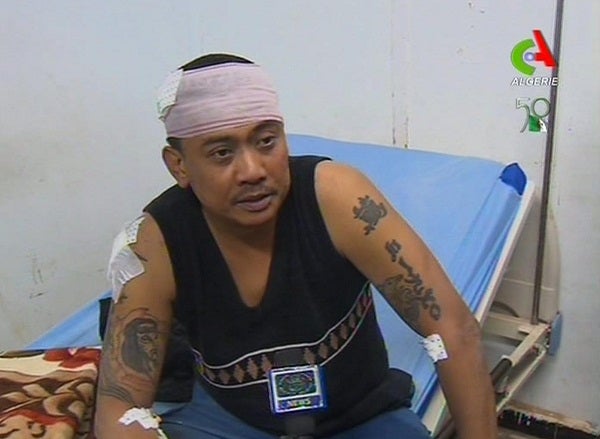 An unidentified rescued hostage speaks to the media in a hospital Ain Amenas, Algeria, in this image taken from television Friday Jan. 18, 2013. Algerias state news service says nearly 100 out of 132 foreign hostages have been freed from a gas plant where Islamist militants had held them captive for three days. The APS news agency report was an unexpected indication of both more hostages than had previously been reported and a potentially breakthrough development in what has been a bloody siege. AP/Canal Algerie via Assiaciated Press TV

MANILA, Philippines—Thirty-four Filipinos working at the Algerian gas field, where dozens of foreigners are feared dead in a hostage incident, have been flown out of the country, Department of Foreign Affairs (DFA) Undersecretary Raul Hernandez said on Friday.

Another Filipino worker was injured but escaped on his own along with a Japanese national, the DFA spokesperson added.

But Hernandez declined to confirm press reports that at least two other overseas Filipino workers (OFWs) were among those killed when the Algerian military launched its rescue operation on Thursday.

The official Algerian news agency said four hostages were killed in Thursday’s operation: two Britons and two Filipinos. Two others, a Briton and an Algerian, died on Wednesday in an ambush on a bus ferrying foreign workers to an airport. Citing hospital officials, the APS news agency said six Algerians and seven foreigners were injured.

“The Algerians admitted that there were some deaths and injuries on the side of the hostages following the operation undertaken by the Algerian military forces, but no details were released,” Hernandez said, adding that the injured Filipino worker was “on his way to Algiers for treatment.”

The DFA official said “it was not certain how many of the overseas Filipino workers flown to London by their foreign employer on Thursday were taken hostage when Islamist gunmen overran a gas plant in the north African desert the previous day.”

Earlier, he said the brother and wife of two OFWs in Algeria had separately told the DFA that their relatives and 19 other Filipino coworkers were in the gas field during the hostage-taking.

“Just before the incident in Algeria, they were able to talk to their relatives [who] said,   ‘We are here inside and there are other Filipinos with us,’” Hernandez said.

But it was not clear what happened to these people, he added.

Manila is still trying to determine how many Filipinos were in the gas plant, a task made complicated by the many foreign companies and contractors operating in the area, the DFA official said.  There were at least 3,400 OFWs in Algeria, he added.

Algerian helicopters and special forces stormed a gas plant in the stony plains of the Sahara on Thursday to wipe out Islamist militants and free hostages from at least 10 countries.

Conflicting claims from Algeria’s military and the Islamist militants have muddied the world’s understanding of the hostage-taking and bloody rescue that had angered Western leaders, raised world oil prices and complicated the international military operation in neighboring Mali.

Even violence-scarred Algerians were stunned by the brazen hostage-taking on Wednesday, the biggest in northern Africa in years and the first to include Americans as targets. Mass fighting in the 1990s had largely spared the lucrative oil and gas industry that gives Algeria its economic independence and regional weight.

The militants—led by a Mali-based al-Qaida offshoot known as the Masked Brigade—suffered losses in Thursday’s military assault, but succeeded in garnering a global audience.

The hostage-taking raised questions about security for sites run by multinationals that are dotted across Africa’s largest country. It also raised the prospect of similar attacks on other countries allied against the extremist warlords and drug traffickers who rule a vast patch of desert across several countries in northwest Africa. Even the heavy-handed Algerian response may not deter groups looking for martyrdom and attention.

Casualty figures in the Algerian standoff varied widely. The remote location is extremely hard to reach and was surrounded by Algerian security forces—who, like the militants, are inclined to advertise their successes and minimize their failures.

“An important number of hostages were freed and an important number of terrorists were eliminated, and we regret the few dead and wounded,” Algeria’s communications minister, Mohand Said Oubelaid, told national media, adding that the “terrorists are multinational,” coming from several different countries with the goal of “destabilizing Algeria, embroiling it in the Mali conflict and damaging its natural gas infrastructure.”

The Algerian news agency, APS, said some 600 local workers were safely freed in the raid—but many of those were reportedly released the day before by the militants themselves.

The militants, via a Mauritanian news website, claimed that 35 hostages and 15 militants died in the helicopter strafing. A spokesperson for the Masked Brigade told the Nouakchott Information Agency in Mauritania that only seven hostages survived.

By nightfall, Algeria’s government said the raid was over. But the whereabouts of the rest of the plant workers was unclear.

News of the bloody Algerian operation caused oil prices to rise $1.25 to close at $95.49 a barrel on the New York Mercantile Exchange, and prompted energy companies like BP PLC and Spain’s Compañía Española de Petróleos SA to try to relocate energy workers at other Algerian plants.

Algerian Interior Minister Daho Ould Kabila said the 20-odd militants entered the country from nearby Libya in three vehicles, in an operation commanded by extremist mastermind Mokhtar Belmokhtar, who is normally based in Mali.

“The Algerian authorities have expressed, many times, to the Libyan authorities, its fears and asked it a dozen times to be careful and secure borders with Algeria,” Kabila was quoted as saying on the website of the newspaper Echourouk.

The militants made it clear that their attack was a fallout from the intervention in Mali. One commander, Oumar Ould Hamaha, said they were now “globalizing the conflict” in revenge for the military assault on Malian soil.

France has encountered fierce resistance from the extremist groups in Mali and failed to persuade many allies to join in the actual combat. The Algeria raid could push other partners to act more decisively in Mali—but could also scare away those who are wary of inviting terrorist attacks back home.  With reports from AP and AFP

Read Next
PH to seek damages for US navy ship mishap
EDITORS' PICK
‘Opportunity’: PH senior population on the rise
Powered by style, innovation and passion
House starts inquiry into sugar import mess
Pimentel: Gov’t buyers knew of cheaper laptops but still got expensive ones
A laptop that maximizes your WiFi so you can maximize your productivity
House energy committee chair Arroyo bats for cheap electricity
MOST READ
Imee Marcos bares illegal importation of white onions
U.S. actor Anne Heche is taken off life support 9 days after car crash and dies
PVL: Celine Domingo gets big surprise as Creamline’s Finals MVP
Pimentel: PS-DBM knew of cheaper laptops but still got expensive ones
Don't miss out on the latest news and information.