US navy ship runs aground on Tubbataha Reef 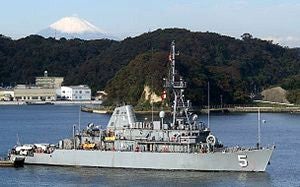 In a statement posted on the US Navy website, the USS Guardian (MCM 5) ran aground on Tubbataha Reef National Marine Park, a World Heritage Site in the Sulu Sea, 640 kilometers (400 miles) southeast of Manila at 2:25 a.m. local time, January 17.

“The Avenger-Class ship had just completed a port call in Subic Bay, Olongapo City and was en route to her next port of call when the grounding occurred. The ship is currently stuck on the reef, approximately 80 miles east-southeast of Palawan Island. The crew is currently working to determine the best method of safely extracting the ship,” the US 7th Public Affairs Fleet said.

The cause of the grounding is under investigation, the Navy added.

The ship was not listing or leaking oil but about 15 percent of the bow appeared to have struck the reef, said Angelique Songco, head of the government’s Protected Area Management Board, after flying over the ship in a Philippine Air Force plane. “It does not appear to be damaged.”

She said it was unclear how much of the reef was damaged. She said the government imposes a fine of about $300 dollars per square meter (yard) of corals that are damaged.

No one was hurt in the incident.

The USS Guardian made a port call in Subic Bay on January 13 for a routine fuel stop.

The crew is composed of about 80 officers and enlisted personnel including eight Filipino-Americans.

In a statement by the US Embassy made earlier, the ship was supposed to dock overnight in Subic, and then proceed to Puerto Princesa for another brief visit.

USS Guardian is based in Sasebo, Japan.

In 2005, the environmental group Greenpeace was fined almost $7,000 after its flagship, the Rainbow Warrior, struck a reef in the same area.

Songco said that park rangers were not allowed to board the ship for inspection and were told to contact the US Embassy in Manila. Their radio calls to the ship were ignored, she said.

She said the ship may be able to float free during a high tide later Thursday.

US Navy ships have stepped up visits to Philippine ports for refueling, rest and recreation, and joint military exercises as a result of a redeployment of US forces in the Asia-Pacific region. The Philippines, a US treaty ally, has been entangled in a territorial dispute with China in the South China Sea.