Aquino open to joint oil dev’t of Recto Bank, but … 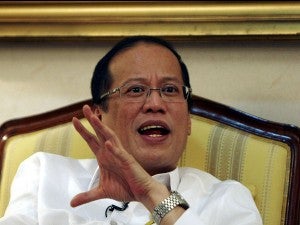 President Aquino is open to the idea of a Chinese company joining an oil and gas exploration in Recto Bank in the West Philippine Sea (South China Sea) but says it has to comply with Philippine laws.

The prospective partner, China National Offshore Oil Corp. or CNOOC, has to recognize that Recto Bank is part of Philippine territory, the President said.

“We’re talking about Recto Bank here. We can’t split Recto Bank with them. Recto Bank is ours. If they want to join, why not? We’re open to investors but they should comply with our laws,” Mr. Aquino said in Thursday’s dialogue with Radio Mindanao Network reporters.

“We believe in our own laws, that there should be dispute resolution. It should be clear that [what] we’re getting into is ours and we will respect what is theirs,” he added.

Ma Keqing, the Chinese ambassador to the Philippines, said both countries should push ahead with a plan to explore oil and gas in Recto Bank, which contained potential reserves of 3.4 trillion cubic feet of gas and 440 million barrels of oil.

The first step, she said, was for both countries to clear CNOOC and the Forum Energy-led consortium of businessmen Manuel V. Pangilinan and Enrique Razon to sign an agreement to confirm and maximize the potential minerals in Recto Bank, off the coast of Palawan province.

The joint cooperation would be the best way for both countries, she said.

The proposal for a joint exploration came amid Manila’s ongoing standoff with Beijing over Panatag Shoal (Scarborough Shoal), a group of coral and rock formations in the West Philippine Sea, where Philippine and Chinese vessels faced off in April 2012.

China claims sovereignty over nearly all of the sea, believed to sit atop vast amounts of oil and gas. The West Philippine Sea is also one of the region’s most important fishing grounds and has shipping lanes that are vital to global trade.

The Philippines, Vietnam, Brunei, Malaysia and Taiwan claim parts of the sea.

In the dialogue, Mr. Aquino said CNOOC had a proposal for a joint venture with Forum Energy, which had obtained an exploration license from the government.

“If they have an arrangement to partner, we don’t object. But it has to conform with Philippine laws,” Mr. Aquino said.

Briefing reporters on the visit of Japanese Foreign Minister Fumio Kishida to Manila, Foreign Secretary Albert del Rosario on Thursday said that the joint venture would be “workable” if CNOOC complies with Philippine laws.

“When we speak of what’s possible, there are service contracts there that have been put out by the government, which is in accordance with the Philippine law,” Del Rosario said.

“Now, provided they do a joint venture with a holder of this service contract and they adhere to all the conditions of the service contract—which is consistent with Philippine law and not in violation of our Constitution—I think that might be workable,” he added.

Pangilinan and Razon are joint holders of Service Contract No. 72, the state-granted exploration franchise covering 80,000 hectares in Recto Bank, which lies within the 330-kilometer exclusive economic zone (EEZ) under the Philippine Archipelagic Baselines Law.

Pangilinan’s Philex Mining, through its subsidiaries FEC Resources Inc. and Philex Petroleum, owns a controlling 64.45 percent of Forum Energy, which holds 70 percent of SC 72. The remaining 30 percent of SC 72 is owned by Razon’s Monte Oro Resources and Energy Inc.

Pangilinan met with CNOCC officials last year for a possible tie-up but Razon said Monte Oro was not too keen on getting a Chinese partner for its share in SC 72.

Mr. Aquino is adamant that all royalties go to the Philippines because Recto Bank is clearly inside its EEZ, being 150 km off Palawan while Hainan, the nearest Chinese territory, is 570 km away.

Forum was scheduled in October 2012 to check the soil stability in the area in preparation for an appraisal well drilling in the first or second quarter of this year. But the Department of Energy refused to give Forum the go-signal pending the resolution of the territorial row with China.

Under the watch of then President Gloria Macapagal-Arroyo, CNOOC, Petron Corp. of the Philippines and Vietnam Oil and Gas Corp. agreed to explore the potential for oil in disputed waters under the Joint Maritime Seismic Understanding in 2005.

This was criticized as unconstitutional for failing to comply with the 40-percent foreign ownership limit on join exploration deals involving natural resources of the Philippines. But Ma said this was “a very valid formula” pending the solution of the territorial row.