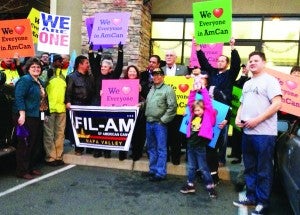 AMERICAN CANYON (Bay Area, Calif.) – Residents of this quiet little town nestled between the cities of Vallejo and Napa are on edge after finding in their mailboxes this week a racially-charged letter directed at Filipinos in American Canyon.

The letter, mailed in an envelope simply addressed, “The Resident, American Canyon,” contains an expired-license violation notice for one Maria Aida Ignacio Brandes aka Maria “Lenny” Ignacio, purportedly coming from the California Department of Consumer Affairs/Board of Barbering and Cosmetology.  It was simply signed “Concerned American Canyon Neighbors.”

“Be advised that under California statutes, ‘Any person providing certain services for a fee is required to be licensed by the Board of Barbering & Cosmetology,’” the letter said, referring to the claimed continuance of hair-grooming/cosmetology practice by Ignacio despite her allegedly expired license.

Information regarding the true identity of the person named in the letter or her profession was not immediately made available to FilAm Star, however.

The text of the letter then turned bitter and personal, overly laced with racial slur.

“……. the American Canyon Filipino community is filthy as it is …… unwanted as it is …. doesn’t need to bring unwarranted/unlicensed practices which assists in bringing down the already downward spiraling property values in our area.

“We are attempting to have our community a law abiding one, without having yet another gang of Filipino scum such as yourself and married daughters who have attempted to assimilate into this once-clean non-Filipino dominated area in American Canyon (Napa Junction) which includes those of your female offspring who have aligned themselves with CAUCASION [sic] husbands to assist in ensuring their half-breed children have “straight noses” in order to be accepted in non-Filipino society.”

Among the American Canyon residents who received the letter is pediatric nurse Marie Logan, an ethnic Filipina married to a Caucasian and with whom she has children.  Contacted by ABC7 News, Logan said she didn’t think much of the letter until she got to the part where the writer chastised inter-racial marriages.  She thought the letter was meant specifically for her.

The white-Hispanic mayor of American Canyon, Leon Garcia, is himself married to Eva Garcia, a Pinay.

In an expression of civil outrage, the American Canyon community – represented by a motley group of residents – marched Wednesday, Jan. 9, from City Hall to the Napa Junction Retail Center where they held placards bearing messages of community unity.

Anthony Quicho, president of the association of Filipino-Americans in American Canyon, said in a statement, a copy of which was emailed to FilAm Star:  “It is of great disbelief that this kind of hatred towards the Filipino community exists, especially here in American Canyon being the most diversified city in Napa County. We would like to reach out to the letter’s writer that Filipinos here in AmCan are also like them – involved in the community, performing fundraisings for the schools, and supporting needy families in the community.  The rally and walk today shows how the city and our leaders are united in it’s celebration of diversity.”

KGO-TV Channel 7 quoted California Board of Barbering and Cosmetology spokesman Russ Heimerich as saying, “This letter is both disgusting and despicable. None of the information in the letter regarding licensees is accurate, making it nothing more than a repulsive work of fiction.”

American Canyon city manager Dana Shigley called the letter appalling, saying to KGO-TV, “We have always valued our Filipino (community), as well as all the races here.”

Added council member Belia Ramos, “(This) is a great opportunity for us to reach out to our neighbors, to use this unfortunate incident to get to know your neighbors, understand each other’s cultures and our perspectives.”

According to Quicho, the American Canyon police is not treating the case a hate crime because there were no actual threats made to either life or property.  But, he added, it is making an effort to find the writer or source of the letter in the hope of ensuring that the situation does not escalate any further.