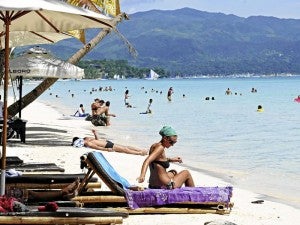 BUSY BORACAY. The DOT’s game plan is to match the Philippines’ products with the market’s actual needs. INQUIRER FILE PHOTO

MANILA, Philippines – The Department of Tourism is gearing up to increase the number of tourists who will sample the Philippines’ “undiscovered treasures and hidden gems” to some 6.5 million international arrivals, and over 32 million domestic travellers by 2016.

In an interview on Sunday morning at 990 AM, Tourism Secretary Alberto Lim revealed three key strategies that the DOT, under the government of President Benigno S. Aquino III, is focusing on to turn the Philippines into a “must experience” destination in Asia.

“We’re playing catch-up with tourism powerhouses like Malaysia, which registered 23 million visitors last year, and Singapore, which had 15 million visitors in 2010,” acknowledged Lim. “Our target is to hit 6.5 million international arrivals by the end of President Aquino’s term.”

To achieve this target, the DOT is zeroing in on improving “access and connectivity.”
“We’re pushing hard push for the rapid expansion of secondary international airports, and address traffic bottlenecks at the Ninoy Aquino International Airport,” he revealed.

Lim stressed that DOT and the Department of Public Works and Highways (DPWH) is currently mapping out a strategic access infrastructure development program between the secondary international airports and strategic destinations for pleasant and easy transport.

“We’re also working with various government agencies and local government units to develop and market competitive tourist destinations and products, with a goal of having one town, one product,” he said.

This means prioritizing the use of existing infrastructure by facilitating the development of mixed-use tourism complexes and community-based programs in strategic locations all over the country.”

Responding to a query from a radio listener, Lim also revealed a plan to make tourism-related investments in the Philippines more attractive.

“ We’ve set up a mandatory tourism enterprise accreditation and certification system that with simplified business set-up and licensing procedures, he said. “And following the direction of President Aquino, we’re encouraging combined public-private sector partnerships to safeguard and preserve natural and cultural sites and vulnerable groups, such as native people, animals, or treasures, for posterity.”

“Our main game plan is to convince, particularly foreign markets, that if they think they’ve you’ve seen enough of the Philippines, think again, because we will show them otherwise,” quipped Lim.

“The Aquino administration is committed to a sustained effort to build a new sense of excitement and vigor around our tourism brand to keep it alive and exhilarating, and elicit renewed enthusiasm from both our captive and untapped foreign markets,” he said.

“They (foreign buyers) are wholesale travel agents from non-traditional markets, and those from traditional markets but who have not yet engaged in selling Philippine tourism destinations and products to their clients in their respective home countries, or are expanding their product lines to include the Philippines, or have included the Philippines in the past but later had to drop us,” Lim said.

“These international exhibits are our main vehicles to expand our sales and distribution system across the globe through market development or tourism promotion in untapped industry channels of consumer marketing, while reinvigorating and somehow reinventing our brand by showcasing the other unknown attributes of Philippine tourism,” Lim added.

The Tourism secretary highlighted that the DOT’s main pitch to foreign buyers and tourists centers around the theme of the Philippines’ “undiscovered treasures.”

“Our undiscovered treasures are the hidden tourism gems scattered throughout our 7,107 islands,” he explained. “These are our stunning natural landscapes and prolific underwater life to the vibrant nightlife, awesome shopping and bargain hunting, delectable native and fusion cuisines, unique destinations, and countless other activities and possibilities,” he said.

Meanwhile, Lim said public-private sector partnerships are now underway to modernize the country’s international gateways such as the international airports in Laoag in Ilocos, Clar and Subic in Pampanga and Manila, as well as Puerto Princessa in Palawan, Cebu-Mactan and Panglao.

“We’re also targeting on modernizing and building new facilities in Southern Philippines, such as Cagayan de Oro, Davao and Zamboanga international airports, and Kalibo in Aklan, which will service tourist-rich destinations like Boracay,” he said.

He revealed that the top five foreign markets for Philippine tourism, according to rank for the first 6 months of 2011, were South Korea, USA, Japan, China and Australia.