DFA backs US claim drone fired in Guam 4 months ago 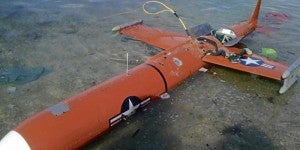 The United States on Tuesday said a US drone found floating by fishermen off Masbate province was actually fired four months ago during American naval exercises off Guam, even as some legislators and Filipino activists called for an investigation.

The US Embassy knocked down speculation that the drone was launched within Philippine air space—which  militant groups said would have constituted a violation of national sovereignty.

The United States has repeatedly shown the power of its drones, as its unmanned aerial vehicles are called. On Tuesday, a US drone strike killed eight people in northwestern Pakistan, reportedly including a foreign tactical trainer for the al-Qaeda terror group.

On Monday, retired US Gen. Stanley McChrystal said in New York  that drones had helped American troops but were hated around the world and that their overuse could jeopardize US security.

In a statement, the US Embassy in Manila on Tuesday said the drone recovered off Masbate on Sunday was actually fired during the Guam exercises last September and was washed ashore in the Philippines.

Embassy spokesperson Tina Malone said the “unarmed target drone that washed ashore off the coast of Masbate Island is an expended BQM-74E Aerial Target drone … launched from the USS Chafee during exercise Valiant Shield 2012 on Sept. 19, 2012, off the coast of Guam.”

“It appears that ocean currents brought the drone to where it washed ashore last week off Masbate Island,” Malone added.

Malone earlier said the drone also was not used for surveillance.

“Ocean currents brought the target drone to where it was found off the coast of Masbate. As such, at no time was the aerial target drone launched nor did it fly or crash within the Philippine territory,” Hernandez said in a statement late Tuesday night.

Hernandez issued the statement after receiving information on the incident from the US Embassy.

He said the DFA was also coordinating with Philippine defense officials, adding: “We would like to assure the public that every effort is being taken to address this issue.”

According to the US Navy website, last year’s Valiant Shield gathered 25 US joint forces from the Navy, Air Force and Marine Corps for nine days to train in “real world operations including combat exercises, search and rescue and humanitarian aid exercises.”

Can be used for combat

The militant Bagong Alyansang Makabayan (Bayan) and its allied fisherfolk group called on Congress to investigate.

Bayan also suspected US drones of being used to map areas of the Philippines presumably rich in natural resources. “The use of drones in Philippine airspace is another reason why we should junk the VFA,” Reyes said.

Pamalakaya vice chairman Salvador France said the drone could have been used to spy on activities of the communist New People’s Army as part of counterinsurgency efforts.

Not used against rebels

A human rights group rejected the US statement that the drone was not used for spying.

“Who are they fooling? Drones are remotely controlled and have spying capabilities,” said Paul Vincent Casilihan, spokesperson of Karapatan-Bicol.

Maj. Harold Cabunoc, spokesperson of the Philippine Army, denied  that drones were taking part in the fight against rebels.

The recovered drone was brought on Tuesday to the Philippine Navy Naval Forces for Southern Luzon (Navforsol) headquarters in Legazpi City.

Defense analyst Rex Robles believed the vehicle was an aerial target drone, as indicated by its technical descriptions, and not a surveillance drone, unless the authorities found radar and other data recording system in it.

“It’s to simulate hostile aircraft. It’s a moving target. They’ll fire on it, and if it’s hit, then the exercise is successful,” Robles said.

Asked if the use of the drone was sanctioned by the government, presidential spokesperson Edwin Lacierda said it would discuss the matter with Philippine defense officials.