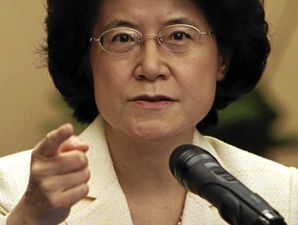 The Philippines and China may forge ahead with the joint exploration of oil and gas reserves in the West Philippine Sea, which the latter calls the South China Sea, even as their leaders continue to squabble over boundaries.

Chinese Ambassador to the Philippines Ma Keqing made this suggestion as she said these resources could remain idle for a very long time if the Philippines and China waited for a final resolution of their territorial dispute before engaging in any commercial development in the area.

In an interview with the Philippine Daily Inquirer editorial team last month, Ma said the Philippines and China should allow oil and gas prospectors—China National Offshore Oil Corp. (CNOOC) and the Forum Energy-led consortium of businessmen Manuel V. Pangilinan and Enrique Razon Jr.—to strike a deal to confirm and maximize the oil and gas potential of Recto Bank off the coast of Palawan province.

Estimates showed that the Recto Bank prospect has potential reserves of 3.4-trillion cubic feet of gas and 440 million barrels of oil that would make this a bigger find than the Malampaya gas field, also off Palawan.

“I think they (Forum Energy) are now discussing a joint cooperation with China. It’s a very positive sign. Why not let two companies discuss the cooperation? I think cooperation will be the best way,” Ma said.

The Chinese ambassador took note of “previous proposals to shelve sovereignty disputes and pursue joint cooperation,” referring to the Joint Maritime Seismic Understanding (JMSU) that the Arroyo administration initiated in 2005.

Under the JMSU, the three signatories—CNOOC, Petron Corp. of the Philippines and Vietnam Oil and Gas Corp. (PetroVietnam)—agreed to explore for three years the potential for oil in the disputed waters among the three countries.

The arrangement was criticized as unconstitutional for failing to comply with the 40-percent foreign ownership limit on join exploration deals involving natural resources of the Philippines.

“I think it is still a very valid formula pending the solution of the disputes. We can have cooperation with each other to [explore] the resources because we cannot see in the near future… that we can solve all the disputes,” the Chinese ambassador said.

Ma said the disputes over sovereignty and territorial integrity were very sensitive matters.

“We must be very, very careful when talking about the territorial issues or disputes, that’s why. Why not shelve the issues and talk about cooperation?” she said.

Ma said that in this era of globalization, the interests of China and those of other countries in the region were intertwined.

“China’s interests are interconnected with its neighbors’ and other countries’ at large. I think that is the bigger picture. If we want to seize opportunities [and] not lose time, we should get along with each other,” she said.

In a text message, Pangilinan, chairman of Philex Mining Corp., concurred with the views of Ma to explore Recto Bank. But he said he must face the “political reality” involved in any Recto Bank find.

“I must say that the Chinese position, as articulated by the current Chinese Ambassador Ma and by [its] past ambassadors, has, as far as I know, been consistent in respect of the dual sovereignty or commercial aspects of the potential oil and gas resources in the West Philippine Sea. That’s the same stance CNOOC conveyed to us last year,” he said in a text message.

“As businessmen, we can only respond appropriately to one side of that duality—the commercial one. That’s a course we would like to pursue keenly, purely as a commercial matter. After all, if there is nothing out there under the seas, what is there to quibble and quarrel about?” he said.

Pangilinan added: “We appreciate that we cannot abstract from the political realities obtaining and, since we’re only a contractor to—not owner of—those potential resources, we must respect and work within the political guidelines and rules.”

In a text message, Razon, chairman of International Container Terminal Services Inc., said that reaching a “commercial solution” first between the Philippines and China was possible while the territorial dispute remained unresolved.

Razon said the parties could negotiate on profit sharing and royalties from any oil and gas find that would be agreeable to both the Philippine and Chinese governments. He suggested that drilling rigs be provided by operators from third-party countries.

Pangilinan and Razon are the joint holders of Service Contract No. 72, the state-granted exploration franchise that covers 80,000 hectares in Recto Bank. The bank falls within the 330-kilometer exclusive economic zone (EEZ) under the Philippine Archipelagic Baselines Law.

Pangilinan’s Philex Mining, though its subsidiaries FEC Resources Inc. and Philex Petroleum, owns a controlling 64.45 percent of Forum Energy Plc, which holds 70 percent of SC 72. The remaining 30 percent of SC 72 is owned by Razon’s Monte Oro Resources and Energy Inc.

Pangilinan met with CNOCC officials last year for a possible tie-up but Razon said Monte Oro was not too keen on getting a Chinese partner for its share in SC 72.

President Aquino is adamant that all royalties go to the Philippines because Recto Bank is clearly inside the Philippine EEZ, being 150 km off Palawan while Hainan, the nearest Chinese territory, is 570 km away.

Forum was scheduled in October last year to check the soil stability in the area in preparation for an appraisal well drilling in the first or second quarter of this year. But the Department of Energy refused to give Forum the go-signal pending the resolution of the territorial dispute with China.