How Elena Lapid got her groove back 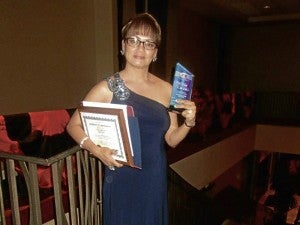 OPRAH MOMENT. Elena Lapid Salonga, proudly holding up her “Entreprenuer of the Year” award given to her by the Filipino-American Chamber of Commerce of Orange County, California, last October 2012.

Elena Lapid Salonga remembers the day she was on the phone with her husband, Jun. She wanted to go home, she begged him, forgetting she was home… in a beautiful house that they had bought in the sunny community of Chino Hills, a suburb in Los Angeles, California. Her three children were enrolled in good schools—the eldest and middle child are in high school, and the youngest in elementary. Chino Hills is a good place to raise children. It is recognized as one of America’s 100 Best Communities for Young People. On Saturdays, Elena goes shopping; she has money for that and for household expenses.

Elena was living the American Dream, so what was that jeremiad all about?

She was lonely. The family moved to United States in 1993, but her husband had to be in Manila several months a year to oversee the business that was their only source of income. They left the Philippines not for want of a better life, but because their eldest son, Allen, was soon to start his college education in the US.

Jun Salonga, a mechanical engineer, and his wife, Elena Lapid Salonga, who described herself as a plain housewife then, married young. He was 22; she was 18. From that early beginning, it was clear what their roles would be in their marriage—he would provide, she would nurture. The coming of children simply meant increased activity in their individual turfs, and a noisier household.

And so it was until 2009 when Elena had a coming out that surprised even Jun. At age 57, the homesick housewife who once pined for the old country morphed into a self-confident entrepreneur who owned and operated a factory that churns out a USDA-approved product Lapid Chicharon, her father’s most popular and successful concoction in the Philippines.

“My kids had grown. They had their own lives, their sets of friends. I realized I was alone again. I had known utter loneliness, and I did not want to experience that again. Worse, there was nothing new for me to do. No children to cook and wash clothes for, and to drive to-and fetch from-schools. For the first time, I became aware that something was missing in my life,” retells Elena.

Despite sounding like one as she narrated her story, she is not a drama queen. She is quite a gas, in fact. “I did not finish college. In the past, whenever I was asked about the work I do, I’d say I’m a ‘chemist.’ Y’know, kay mister umaasa.”

Elena laughs a lot, having been raised in a house of mirth, the eighth among eleven siblings who have taken to heart the teaching of their parents—that with prayer any pain can be overcome and turned into joy.

It was the absence of people she loves that drove Elena to the throes of severe depression in the first seven years of her life in America. Her husband and her siblings were her only friends in the world. There was no maid, no driver that could make life easier for her. She underwent every bit of drudgery known to most Filipino immigrants in America, but she was spared the job hunt. Her husband provided for all their needs.

Elena was not consoled. At night, when the children went to bed, she would retreat to her corner in the living room. Lights out, television off, she would sit in the dark, contemplating nothing, enveloped by complete desolation. This went on for years, broken only by her annual visits to her family in Manila and those few months when Jun was in Chino Hills.

“I did not seek professional help for my depression. How could they possibly know what was going on in my head?” she said, disparagingly. “But,” and here came the humdinger, “Oprah! The American television host had no idea what she had done for my healing.

“As an Iglesia ni Kristo devotee, the Church is very important to me. I would pour out everything in my prayers. Still, I felt that I needed to confide in someone. But who was I close enough to so I could be comfortable talking about my life? 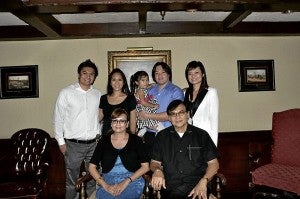 FAMILY PRIDE Elena Lapid Salonga got her life popping again with the support of her family—and of course, her late father’s special Lapid’s chicharon recipe

“And then I happened to watch Oprah’s show and I found myself crying. It seemed like she was talking to me. I could relate to the stories I heard about depression. I also listened to Dr. Phil in earnest. The show became a huge part of my life in the US. I would buy all the books Oprah recommended. I would wait for the bookstore to open because their books went fast.”

One important lesson she learned from the iconic Oprah Winfrey: she had to learn how to take care of herself. “I read in those books that I must have a social life. So I made small steps. I’d go out in the garden and initiate small talk with my neighbors. And then eldest my son started urging me to go out, to have friends of my own.

“That convinced me. I’d held back because my main concern was the wellbeing of my children, I wanted to be home for them. With the blessing of my son, I began accepting invitations to birthday parties. Newfound friends would call me to join them in shopping trips. I wouldn’t say I became close to anyone. But slowly, I lightened up. I regained my self-confidence, my outlook became less and less bleak. Although I’d always been proud of being a ’plain housewife’ I was determined to move on, to grow, and to start being productive.”

This state of mind helped Elena tremendously when she was starting her business. “I got zero support, then. The businesspeople I met in the US only had discouraging advice: ‘Don’t do it. You’re too old to be starting a business. This is America, the USDA will give you a tough time, your competitors are giants.’ I was undaunted. This strengthened my resolve to introduce my father’s Lapid Chicharon in the US.”

Elena went ahead with her research. She went to supermarkets, bought all the competitive products, called up manufacturers. Her findings? “Not even the bestsellers could compare to the quality of our chicharon.”

Spoken like the proud bearer of her father’s legacy.

Elena sold one of their properties in Manila and proceeded to buy a factory, manpower and all, in West Covina, another suburb in Los Angeles. She did all the groundwork for Lapid Foods, Inc., a wholesale manufacturer and distributor of the Lapid food products. She hired a lawyer, contracted an artist to do the label, issued strict instructions to the production people—her way or no way at all.

“I had to take the bull by the horn. I met with the workers, both Filipinos and Mexicans. I told them I was the new owner of the factory and this was how my product was going to be cooked. I set my conditions. If they did not follow my instructions, the cost would be taken out from their pay or they would be fired.

“On the other hand, if they did what I asked them to do and the product failed, I would take responsibility for that.”

This crucial meeting took place in May 2009. In August 2009, Elena’s Lapid Chicharon was open for business. Its biggest consumers, in the beginning, were concentrated in California, with orders of 40,000 a month.

Then the calls for orders started coming from all over the US. Elena recalls that at that time, she could barely keep up with the demands from Alaska. The stores in Hawaii, New York, New Jersey, Seattle in Washington, and Chicago in Illinois were likewise calling for more.

Getting the USDA’s Nod 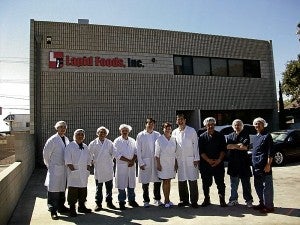 LAPID FOODS, INC. in California now ships 100,000 orders a month to various outlets in the USA, and is still growing.

In May this year, the USDA personnel monitoring her factory—they have an office in the premises—gave Elena a round of applause for passing the Assessment conducted by the Washington head office. The inspection most feared by factories all over the US is done every three years, where everything from ceiling to floor and every piece of furniture and utensils and factory uniforms are thoroughly swabbed for laboratory scrutiny.

These days, Elena looks back on those years and asserts that if she had to go through every single experience again, she wouldn’t change a thing at all.

And this she has to say in earnest, “When it comes to perseverance and industriousness, I can give credit to only two people—my father, Federico ‘Ka Dicong’ Lapid, Sr., and my husband, Alfonso Salonga, Jr. Jun, being an engineer, did a good job helping me improve the process. He even enhanced the taste by concocting a good blend of spices.

“And, of course, it was my father’s hard work and vision that started it all.”

It has been a life journey with surprising twists and turns. Elena feels that she has been getting her education all these years. And she finally found the missing piece in her life: To carry on her  father’s legacy thousands of miles from home.

It was too late to show off to her father in 2009. “Ka Dicong” passed away in 2002. But Jun was in for the biggest surprise of his life. “From the airport, I drove him straight to the factory,” said Elena, laughing.

No money in the world could buy the look on Jun’s face when he saw what his wife had accomplished. There should have been a picture of it. Framed and all.