Filipina and husband own ‘incredible’ Christmas house in Jamaica Estates 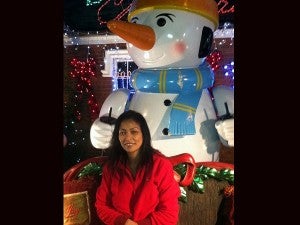 I saw four Santas, Three Kings, an army of soldiers and snowmen and a choir of children. Rudolph and his reindeer were winding their way around the garden, while a white angel was suspended from the trunk of an ancient tree.

Nothing was miniature in this scene, everything was life-size. One would think the Nativity would feel crowded having all these characters around it. Think again. The menagerie was not complete without the twinkling lights, braids of ribbons and glass balls dangling from the trees. And while a showtime marquee proclaimed “Peace on Earth,” Christmas songs blared in the background.

Cynthia Paragas-Gurino was not quite done yet. She offered to dress up her “two little girls” so visitors could photograph them as well. She actually meant her two dogs. The show had only just begun. 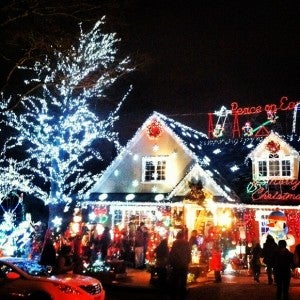 This lavishly decorated house in Jamaica Estates in Queens has been attracting a stream of visitors and onlookers since the beginning of the holidays. It is a feast to the eyes of young children, a bewilderment to adults who wonder about the electric bills. Visitors were snapping photos and shooting videos when I arrived. Parked vehicles wound their way around the block, traffic about to form.

Driving by recently, I was drawn to the gaudy way this house was dressed and accessorized. Curious, I stopped by, not expecting the owner to be Filipino American.

The gracious Cynthia who hails from Quezon City, welcomed me and entertained my questions. She works as a clerk at a nearby company. She and her American husband, who works in construction, set up their annual holiday garden show with the help of two workers. They begin around October. By the time Thanksgiving comes around, lights, music and action are up, and a sparkling house in red and green livens up the historic Jamaica Estates neighborhood about 45 minutes from Manhattan by train. 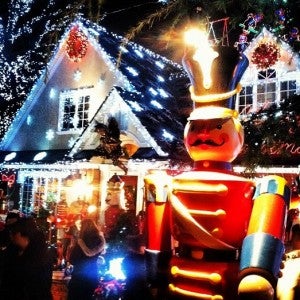 The extravagant decor had been a tradition of her husband and his first wife, said Cynthia. “They have been doing this for 40 years.” When Cynthia married him in 1995, she continued the tradition. “Ever

since, I’ve been helping him,” she told The FilAm.

The couple enjoys meeting the strangers who drop by to enjoy and marvel at their Christmas décorations. They answer all questions but prefer to keep the cost a secret.

They bought their decorations from all kinds of stores, including online, but mostly from her brother-in-law’s store in Ozone Park.

“I never knew there are quite a few kababayans in this neighborhood,” said Cynthia. “If not for this house, I wouldn’t have met them.”

The “Incredible Christmas House” has become a holiday destination in Jamaica Estates. It has its own Facebook page.