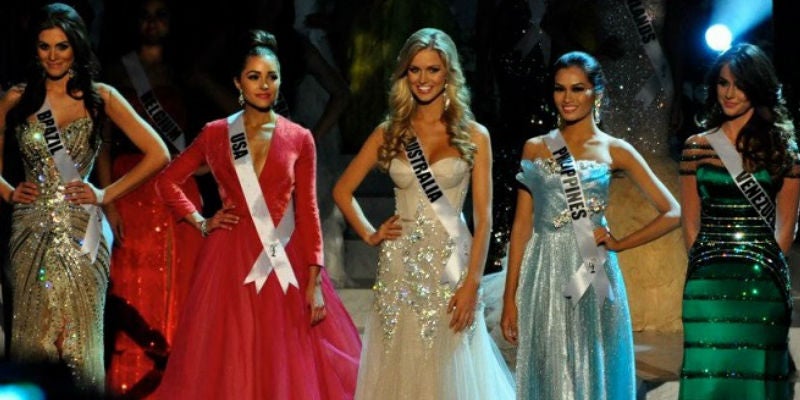 Miss Universe 2012 Olivia Culpo of the USA and her court. PHOTO/ ELTON LUGAY

LAS VEGAS—To many Filipino pageant watchers, Miss Philippines Janine Tugonon was the complete package: Beauty, grace and smarts. She was – but, of course — the Filipino favorite from the beginning. And when she answered her final interview, many had thought she nailed it.

But she ended up placing second to Miss United States Olivia Culpo in the 61st Miss Universe pageant. Many Filipinos around the world expressed their dismay and disappointment.

Former Miss Universe finalist Venus Raj was in shock. “I am so sad,” she told The FilAm within moments after the program at Planet Hollywood Resort & Casino ended. “She was perfect, but it’s fate, we cannot do anything about it.”

Cathy Santos, a sonographer in Las Vegas, could not contain her anger.

“I am so upset, very disappointed with the results. This is like when Pacquiao lost, it’s going to take a few days,” she told this reporter.

to be philosophical: “First runner-up is not bad, it’s a strong finish.”

Tugonon thanked the legions of fans who supported her. In a recorded video message shown prior to the announcement of the pageant victor, she said Filipinos take pageants seriously and that if she won, it would be her “best Christmas gift to Filipinos everywhere.”

For many FilAms, the excitement at the pageant began to build up when Tugonon made it to the Top 10. Her name was called last. Filipinos leapt to their feet, cheering. It was another loud, proud moment in Las Vegas and it was not because of Manny Pacquiao!

Throughout the two-hour program, contestants from about 90 countries competed in three categories: swimsuit, evening gown and personality interview.