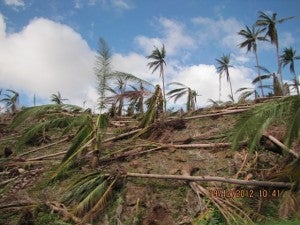 Davao Oriental, December 20, 2012: A hundred kilometers away from ground zero where super tropical cyclone Pablo first hit land, every which way you looked there was devastation all around from blown roofs, windows, squashed nipa huts, exposed twisted steel bars, and skewed railings along the highway. Uprooted coconut trees lay strewn helter-skelter. As far as the eyes could see, there were only brown balding hills and mountainsides. Thin solitary coconut trees dotted the hilltops. Those left standing had their tops shaven one side or altogether cut off as if given a mass shaving by a high powered buzz saw. Hardly any hardwood can be seen.  No forest stood on the way of this cataclysmic phenomenon. We wondered how the towns of Baganga, Boston, and Cateel faired. We all knew what happened in New Bataan in Compostela Valley.

As we traversed the highway that cut through the coastal town of Cateel, capital of Davao Oriental, something caught the eye of one of my companions. In the midst of the destruction somewhere between the road and the sea, the word “Why? “ was spelled out clearly with the use of debris left behind by Typhoon Pablo. It made everyone pause and utter “Why?” Indeed. Why did this catastrophe happen?  PAGASA, the nations weather bureau, had no alarm signal designated for cyclones described by NASA as Category 5 – weather disturbance with sustained winds of 161 mph or 259 kph. PAGASA only had up to Signal #4 for sustained winds at 115 mph or 185 kph.

In Banganga, next town to Cateel, old timer Elmo Nazareno, principal at the National High School of Banganga, said that his 89 year old mother, Meding, said she has never experienced a typhoon that created such fear and destruction in all her life in Baganga. The one closest, she said, was in 1948 or 49, but it wasn’t anywhere near Pablo’s wrath. Their newly renovated 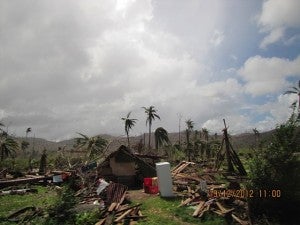 ancestral home had its roof and windows blown away. Rainwater dripped through the tarpaulin that partly covered their anteroom as he narrated the horrifying experience. The high school he heads, which sits on a hill, was completely destroyed, he said, as most of the schools in the province. He could hardly contact the students since they live all over the province and most likely are in dire straights as everyone else.  But he is hopeful that the school will be rebuilt soon since he heard that a regional high school nearby is already undergoing reconstruction.

When asked why there seem to be a dearth of hardwood, he mentioned that indeed, they were surprised themselves to see, when most of the coconut trees were down, that clearly, the tall mature hardwoods had gone. He mentioned that once, Baganga had four logging companies operating in the area. Might be one of the answers to “Why?”

Sol Fuentes, a copra trader, holding back her tears, narrated how she and her husband pulled a 50 kilo sack of rice against their front door to keep it from getting blown in. It was no match to Pablo’s might. After the storm had passed – only the skeleton of her home was left standing. They miraculously escaped with their lives. Her livelihood gone.

For decades, Mindanao had dodged most of the destructive typhoons that passed through the archipelago. Typhoon Pablo seemed to have made up for all the compounded destruction.

Inside the battered seaside city hall of Baganga, DSWD goods lay stacked several feet high waiting for the proper time to distribute them. According to DSWD Regional Director Priscilla 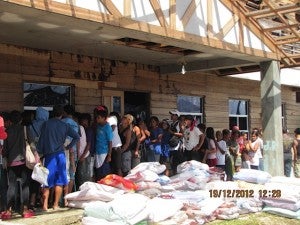 Razon, each family is given 10 kilos of rice good for 4 days. By giving such, the people don’t have to line up every two days, she said.

Joan Nazareno, daughter in law of Mayor Nazareno, and a relative of Elmo, said that she grades the performance of DSWD 80 percent. Not quite 100 percent efficient and resourceful but good enough considering the unexpected and rare occurrence.

Razon said they were warned of the impending super typhoon but since they have never experienced such a super cyclone, they were clearly not prepared. However, the same day after the devastating typhoon hit the coastal towns, DSWD was soon on the scene. Dispensing relief goods as fast and as efficiently as possible.

Together with us on the van that took us to Baganga, seven DSWD employees, two from Manila, were on their way to relieve their colleagues who have been in town for 5 days. And this was two weeks after Pablo hit. Razon foresees 3 to 6 months more of assistance before they leave the rebuilding to local governments. Razon was enthused by the quick assistance of foreign aid headed by USAid and OCHA, Office for the Coordination of Humanitarian Affairs, led by the United Nations Emergency Relief Coordinator. She also mentioned that the government of Malaysia was one of the first to send aid by sending over two C130 planes full of relief goods.

Razon added that they adopted the UN disaster approach called WASH, for water, sanitation and hygiene; food and non-food goods such as blankets, tents, etc. They also implemented 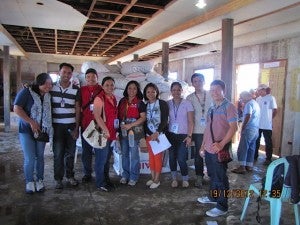 camp management cluster for temporary shelter. The Department  of Health on the other hand provide stress or trauma debriefing or Psycho first aid.

DSWD aside from providing basic necessities, have also started the Cash for Work program by hiring disaster victims to clean up the debris or do construction work;  paying them P215  a day or 75 percent of the minimum wage.

Volunteers trooped to the affected area soon after everyone realized the magnitude of the devastation wrought by Pablo. I was surprised to see very young looking social workers immersed in their jobs. Razon said that not only were there organizations that sent in relief goods, they sent volunteers as well.

On our way back to Davao City, seven young returning volunteers joined us. They belonged to a mountaineering group—the oldest being 27 and the youngest 21. They have been assisting DSWD for the past five days with crowd control, distribution, and everything else in between. They lived in tents and cooked their own food. These unsung heroes said this is already their second deployment. They were at New Bataan at Compostela Valley two weeks ago assisting in search and recovery operations. I was surprised to hear that these young men and woman have already gone through disaster assistance training, and they look forward to more deployment in the coming weeks.

I need to include their names here — they do not hanker for recognition but they deserve our praise for their unselfish efforts. They are Julyvir Ongcay, Mark Anthony Dela Rama, Jayson Perez, Ralf John Marquez, Vincent Jacinto, Noel Hermocilla and Crystal Mendoza.

Leave it to Filipinos to keep their humor and high spirits in the face of calamity. Seen in Cateel, once a bustling town, a handwritten sign that said “ Pablo Sari-sari store” pointing to a make-shift corner store.

In Baganga, a sign said “Pablo Lodging” on the side of a patched up hut.