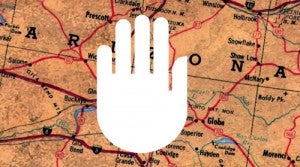 PHOENIX—People on both sides of the immigration debate in Arizona are skeptical of new research that shows a national decrease in the flow of illegal immigration from Mexico into the United States. But there is one thing they are certain of: undocumented immigrants are steering clear of the border state.

“I think they are just avoiding Arizona,” said Jesse Hernández, a real estate agent who works in the Maryvale neighborhood where the exodus of immigrants, due to the crackdown on illegal immigration and the implosion of the housing market, is especially visible. “They are going to California and other places. No matter how much worse things are in the US, they are still coming over here. It’s a human interest to look for a better opportunity.”

The survey, conducted by Douglas S. Massey, co-director of the Mexican Migration Project at Princeton University, showed that interest in migrating to the United States from Mexico has dropped and the net flow has gone to zero for the first time in 60 years. Apprehensions of Mexicans along the border have also fallen by 70 percent in the last 10 years.

Mark Krikorian, director for the Center of Immigration Studies (CIS), a Washington, D.C.-based conservative think-thank that advocates for less immigration, is also skeptical that the trend of migration could be changing.

“I think it’s clearly false. I don’t think there is any likelihood that we should see a significant end to Mexican immigration, without a change in U.S policy,” he said.

But he believes Arizona is a good example of how local state policies could be used to stem the flow of illegal immigration successfully.

“There’s no question that Arizona’s immigration laws have reduced the illegal population more than it would have happened without those laws,” he said.

Thousands of people left Arizona before the anti-immigration law SB 1070 went into effect last year. The law, considered the toughest in the nation at the time, made it a state crime for undocumented immigrants to live in Arizona and made them subject them to incarceration. Before it could be completely implemented, federal courts blocked key provisions of the law, leaving in effect aspects that prohibit cities and police departments from limiting immigration enforcement.

A study released last year by BBVA Bancomer Research, a financial institution in Mexico, found that 100,000 Latinos had fled the state in 2010. Based on remittance information, the study estimated that about 23,000 of them were Mexican nationals who returned to Mexico from June through September 2010.

Beyond SB 1070, says Krikorian, Arizona’s experience with another immigration law pushed immigrants away. That was an employer sanctions law passed in 2007 that made it mandatory for businesses to use a federal database known as E-Verify to check the immigration status of their new hires and also made them subject to penalties if they knowingly hired unauthorized workers.

It was Arizona’s success stemming the flow of illegal immigration that inspired other states to enact legislation similar to SB 1070, according to Krikorian. But he believes is too early to tell what will happen in places like Georgia that recently enacted legislation even tougher than the Arizona law.

Hernández, a former president of the Arizona Latino Republican Association (ALRA) who supported SB 1070 and employer sanctions, recognized that a lot of businesses had to close their doors when they lost Latino customers as well as workers. But he argues it is the underpaying of these undocumented workers that hurts the Arizona economy.

While the absence of undocumented immigrants in places like Maryvale left behind shuttered houses and closed businesses, Hernández believes it has also opened the door for reinvestment in properties by people from Texas and Canada.

Al Preciado, another real state agent and member of the Board of Directors of the Hispanic Chamber of Commerce has a different perspective.

“(The immigrants that left) didn’t cause the blight, it was the state legislators that caused the blight by enacting SB 1070,” said Preciado. “The same thing would be nationwide if we continue this trend.”

Preciado argues that the exodus of immigrants leaving Arizona has hurt the overall housing market by causing a decrease in the population that drives demand for homes.

“Real estate is really simple; demand drives real estate; what drives the value of a home is population. If you have no population, you have no demand,” he said.

A study released in March by the Center for American Progress (CAP), a progressive think tank in Washington, D.C., contrasts the economic effects of massive deportation with the effects of legalization of Arizona’s estimated half a million undocumented immigrants.

An enforcement-only approach could lead to a loss of 17.2 percent of total employment in the state and shrink the state’s economy by $48.8 billion, according to the report. Legalizing undocumented immigrants in the state, meanwhile, could increase employment by close to 8 percent and increase state tax revenues by $1.68 billion.

Yet, defenders of laws like SB 1070, including its architect Republican Senator Russell Pearce contend the exodus of immigrants in the state has been a major victory to cut down the health services and education provided to their US-born children.

Former Representative and Democratic leader John Loredo argues there’s nothing to celebrate about Arizona’s damaging of vital sectors of the economy like agriculture and construction by driving out their core workforce of immigrants.

“In reality all he (Pearce) has succeeded in doing is killing the Arizona economy and ensuring that the state is at rock bottom in terms of other states as they recover from this economic crisis,” said Loredo, who is also a political consultant.

It’s unclear how the drop in undocumented immigration could affect the rhetoric of the immigration debate in Arizona.

Earlier this year, the business community took a stand against a set of anti-immigration bills, concerned over a boycott on the state that has already cost $140 million dollars in losses to the convention and conferences industry since the passage of SB 1070. They successfully managed to muster sufficient conservative Republican votes to stop the bills.

But whether organizations like the Arizona Chamber of Commerce will continue to weigh in on these issues could depend on the political future of the architect of SB 1070, according to Loredo.

“What they choose to do in this recall election will determine how quickly our state rebounds economically,” said Loredo.