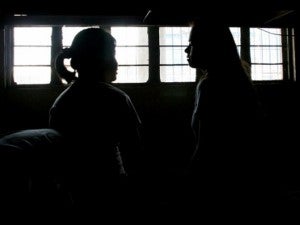 Geralyn Quezo, 17, (R) looks on as she stands by a fellow victim of human trafficking at the Visayan Forum Foundation’s halfway house in Manila, 09 July 2007. AFP FILE PHOTO

MANILA, Philippines — The Bureau of Immigration has started deportation proceedings against a foreigner suspected of having ties with a human trafficking syndicate that provides fake Philippine passports to Chinese nationals travelling in the country.

Mangrobang said See was with a Chinese companion Jianhuang Guo, 37. They were both arrested at the NAIA 3 terminal last December 12 when the duo arrived a Cebu Pacific flight from Macau.

Both are presently detained at the immigration jail in Bicutan, Taguig pending deportation proceedings.

Mangrobang said the passengers were apprehended after Guo presented a Philippine passport in the name of Johnny Dela Cruz Que which turned out to be spurious.

She said Guo’s inability to speak in Filipino aroused the suspicion of immigration officers who then doubted the authenticity of his Philippine passport.

At this point, See admitted that his companion could not talk in the language and that he was actually a Chinese national.

He then produced his companion’s Chinese passport and identication card as a holder of a special resident reiteree’s visa.