Hawaii-based poet and teacher Ruth Mabanglo has made it her mission to promote the Filipino language and culture worldwide
By: Anna Leah Sarabia - @inquirerdotnet
Philippine Daily Inquirer / 12:57 AM December 16, 2012 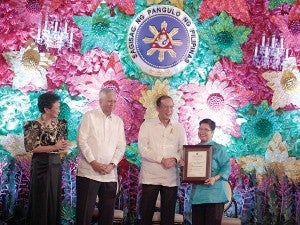 In this age of globalization, nothing could be more difficult for a Filipino living abroad than to work for the preservation of one’s own language and culture.  But Dr. Ruth Elynia S. Mabanglo is not so easily discouraged.

As a multiawarded poet and playwright, her love for the Filipino language has found meaning and it remains a calling.  The first woman to join the Hall of Fame of the Don Carlos Palanca Awards for Literature, Ruth has made it her mission to promote Filipino worldwide.

Ruth was in Manila recently to pick up a plaque from President Aquino as a 2012 Presidential Awardee for Filipino Individuals and Organizations Overseas, in the “Pamana ng Pilipino” category. It is conferred on Filipinos overseas who have brought the country honor and recognition through excellence and distinction in the pursuit of their work or profession.

She has published six books of poetry and several scholarly works included in anthologies and often cited in scholarly journals.  In 2008, the De La Salle University Filipino Department convened critics and scholars for a monthly forum on her works, the “Ruth Elynia Mabanglo Lecture Series.” Her poems were among those highlighted in the 2012 Aliw award-winning film by Alvin Yapan, “Ang Sayaw ng Dalawang Kaliwang Paa.”

Ruth’s latest crusade is to nurture Filipino as a global language. Several years ago, when then President Gloria Arroyo pushed for Spanish to be taught in high schools and for prioritizing English so Filipinos could better serve global business, Ruth mobilized a protest petition.

“I encouraged my students all over the United States to sign a petition to fight the killing of Filipino in high school and college, which was part of the Gullas Bill that Arroyo favored. Later on, I organized the ‘Filipino as a Global Language’ conference as a professor of Filipino language and Philippine literature at the University of Hawaii,” she said.

Courses around the world

Through the conference, Ruth began to identify all the Filipino language programs in the world.

“I also found out that there are Filipinos teaching Filipino in Malaysia, Brunei and Beijing.  In Beijing, there is a masters’ degree program in Filipino. In Gaida University in Osaka, Japan, there is a Philippine Studies program, major in Filipino, and it sends students to take higher level courses in Filipino to the University of the Philippines.

“In the University of Hawaii, I have a government-funded Fulbright program that sends Fil-Am students to study advanced-level Filipino in Manila for 10 weeks.”

Apart from identifying these programs and creating a global network of specialists in Filipino, Ruth and her conference colleagues agreed to help each other with materials for teaching courses on Filipino.

People want to study the Filipino language for different reasons. “In Germany and France, the interest would be mainly for the children of women who married Germans or French.  I met some of them in 1997.  There are volunteers who were teaching Filipino as a church-based activity.  The idea was to connect the children to the culture of their mothers, as sometimes the mothers can’t speak German so well and the children need to have conversations with their mothers.”

In Osaka, the interest in Filipino could be related to being able to use it in business and work places where there are Filipinos.  Maybe some Japanese students also take up Philippine Studies in connection with their history. “We are part of the World War II story of Japan, so they opt to learn Filipino, too,” she added.

In Hawaii, Filipino is taught mainly for two reasons. One is for the younger ones to learn the language of their fathers or grandfathers. “Before, children of immigrants were not allowed to speak (any other language besides English) so they want to correct this. The third-generation Filipinos want to learn to speak with their lolas and lolos.”

The other reason has to do with the history of immigrants in Hawaii.  “The American sugar barons who brought in Filipinos workers to the sugar plantations 1906 were required to hire only those who could not read or write.  This was to prevent the workers from applying for jobs with other companies, since the working conditions in the plantations were very oppressive.  They were treated almost like slaves,” she said.

“There are a few Filipinos in Hawaii who are saying that Tagalog is marginalizing the other languages in the Philippines.  Which is untrue—historically or anthropologically,” she argued.

“In the past, others claimed that there were more Cebuano or Ilocano speakers.  But today, Filipino is really the dominant language.   My job is to find out how globalized Filipino is at the secondary and tertiary levels.”

At the basic level, overseas Filipinos have found the means to teach Filipino language and culture.  In Boston, for instance, the doctors and nurses have established church-based programs including a children’s rondalla that has released a DVD.  But all the teachers are volunteers, and there are no learning levels.

“However, in San Diego, California, would you believe there are 70 high schools that teach Filipino as a ‘world language’?  California even has an accreditation system for those who would like to teach Filipino in high schools.  I would like to bring that system to Hawaii so that Filipino majors can earn credits to teach in high schools.  I am working on that now.  I am also trying to standardize the curriculum so that high school students can have at least basic knowledge of Philippine culture, and a basic literacy of Philippine literature in Filipino. For instance, one basic canon of Philippine Literature is Florante at Laura by Balagtas.  Students must be able to pass basic exams on this Tagalog work.

“You cannot learn a language without understanding its culture so I have developed many courses. I have a course on Philippine films… on Filipino food, music and rituals. Language and culture: they are like twins.”