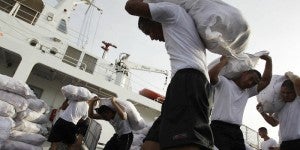 MANILA, Philippines – The United Kingdom (UK) has offered P22 million ($500,000) for relief efforts in the wake of typhoon “Pablo,” the worst storm to hit the Philippines this year.

The announcement was made Wednesday by UK Minister Hugo Swire, who is in the country for a two-day visit meant to improve bilateral relations between the two countries.

“The damage and loss of life caused by Typhoon Pablo is devastating. Our thoughts are with all those affected and with the Philippines’ emergency services as they lead the recovery work,” Swire had said in an earlier statement.

Latest reports had noted that the National Disaster Risk Reduction Management Council (NDRRMC) placed the death toll from the typhoon, which slammed Visayas and Mindanao last week, to 714, with 890 people still missing and more than 1,000 people injured.

An estimated P7.1 billion worth of crops, infrastructure, and properties were also damaged by the typhoon, the agency said.

Meanwhile, Swire’s visit had earlier been noted by the DFA as a “reiteration” of the UK’s policy to reinvigorate its engagement with emerging countries in Southeast Asia, particularly the Philippines, which the UK considers an “emerging power.”

It noted that Swire and del Rosario signed two agreements – a Joint Plan of Action (JPA), which would provide the framework for bilateral directions; and the Air Services Agreements, seen to pave the way for Philippine Air carriers to establish direct flights to UK once the European Union (EU) flight ban on the Philippines is lifted.

“Seeing first-hand the growth and policy dynamism in the Philippines has reinforced why this is an exciting time for UK / Philippines relations. Our shared values such as respect for democracy, human rights and the promotion of free trade and investment  mean that we are very compatible markets,” Swire was quoted as saying in the statement.

” I will return to the UK determined to increase awareness of the good things that are happening here, the strong appetite for more British trade and investment particular in infrastructure, health and education and committed to working with friends and partners in the Philippines to realise the great potential,” Swire added.