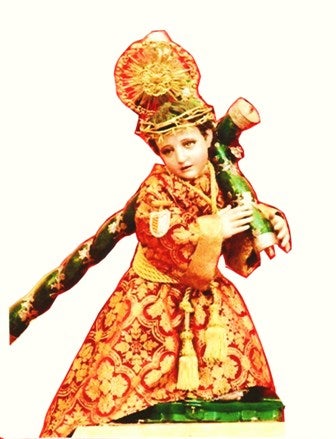 Village captain Willie Concepcion and the constituents of Barangay (village) Sto. Niño, District IV, Galas/Santol, Quezon City, Philippines, has initiated the adoption of the image of the Niño Jesus Nazareno de la Demanda (of Guatemala), as the official patron image of the barangay.  A request for official recognition has been sent to Bishop Honesto Ongtioco, of the Cubao diocese.

Filipino-American expatriate, living and working in Chicago, USA, Noelangelo Guerrero Kristofferson (aka Baby Guerrero), one of the original devotees who introduced the Infant Jesus devotion in Barangay Sto. Niño, introduced the devotion during the feast of the Sto. Niño on January 15, 2011, with a 4’x 6’ oil painting.  He has recently ordered a 4-foot statue, which will make its “primera salida” on the fiesta procession on Sunday, January 20, 2013.

The image is that of the Infant Jesus carrying a cross, and has the signs of sufferings that He was eventually subjected to as an adult.  The origin of this image is attributed to an ancient legend that the Blessed Virgin Mary, when Jesus was still a child, had dreams and premonitions portraying her Son with the marks of sufferings He would receive in His future martyrdom.

Venerated in the Church of Our Lady of Mercy in Guatemala City, Guatemala, since 1780, this Niño has a crown of thorns, halo, tunic with embroidery and cigula (a kind of belt), cross with silver caps, and also drops of blood on His face.  Historical data gives the impression that the image was brought to the homes of respectable devotees to ask for alms for the activities of the Guild of the Jesus Nazareno de la Merced.  It is from this fund-raising activity that the title of La Demanda (The Claim), came from, and has been retained to the present day.

Noelangelo Kristofferson felt it his mission to promote the devotion to the Niño Jesus Nazareno de la Demanda, after seeing the Infant’s picture in the Internet sometime in 2010.  “I literally fell in love with the “La Demanda” and sought to integrate this devotion to the Filipinos’ love for the Black Nazarene of Quiapo, Manila, the Nuestro Padre Jesus Nazareno.”

The 4-foot statue will be enshrined in the Guerrero/Kristofferson residence at #4 Biak na Bato Street, while a smaller 2-foot statue will be donated to the Barangay.  The “La Demanda” will be available for visits to parishes, religious groups, or anyone interested in promoting the new devotion.

The group asks all people of good will for their prayers, active participation, and support in order to spread the new devotion to the Holy Child as the Niño Jesus Nazareno de la Demanda.  For more information, contact Noelangelo at 312-813-3931 (USA phone number), or email at [email protected], or in Facebook (http://www.facebook.com/noelangelo.kristofferson?ref=ts&fref=ts)