UN to raise P2.7B for rehabilitation of areas devastated by typhoon Pablo 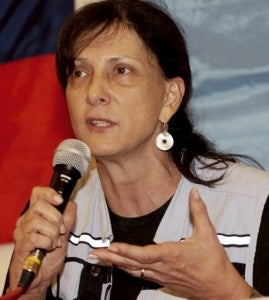 Luiza Carvalho, country officer for the UN Office for the Coordination of Humanitarian Affairs announces the launch of a $65-million (P2.7-billion) global aid appeal to help survivors of Typhoon Pablo (Bopha) in Davao City on Monday, Dec. 10, 2012. AFP PHOTO/JASON GUTIERREZ

DAVAO CITY, Philippines—The United Nations on Monday unveiled in Davao City an action plan to rehabilitate areas devastated by typhoon Pablo (international name: Bopha) in Mindanao—particularly the provinces of Compostela Valley and Davao Oriental—and launched a global campaign to raise some P2.7 billion to back it up.

Luiza Carvalho, UN humanitarian coordinator, who visited the affected areas, said she had seen the total devastation of areas hit by Pablo (international code name: Bopha) and called the destruction “beyond imagination.”

Carvalho said while Pablo’s death toll was shocking—with one town alone losing more than 400 lives—the plight of those who survived the onslaught has been worrisome.

“Entire communities, including pregnant women and children, have no shelter,” she said in a press release sent to the Philippine Daily Inquirer.

Carvalho said the UN would work closely with Manila “as long as it takes to get everyone back on their feet,” adding that livelihood has been erased and the victims would have no means of immediately supporting themselves.

She said in areas she visited, she saw farms wiped out and plantations very different from what they previously looked like and could not even be mistaken for plantations anymore.

“This devastation cannot be erased overnight,” she said.

Carvalho said under the short-term stage of the UN action plan, the immediate needs of the victims would be fulfilled.

She said these would include food, water, medicine and shelter.

Carvalho said under the long-term component of the UN action plan, survivors would undergo psycho-social therapy sessions to help them recover emotionally.

Read Next
Philippines supports rearming of Japan
EDITORS' PICK
Mass testing on April 14; but who to test is unclear
Cash aid trickles down to cities meeting DSWD requirements
US urges masks as dramatic steps to combat virus roll out
Rights groups wary as NBI summons 17 for ‘fake news’
Quick chat with Nicole Andersson: ‘You really don’t need much to be happy’
Quest for COVID-19 cure: PGH needs blood samples from recovered patients
MOST READ
Angelica Panganiban on endorsing Duterte in 2016: ‘Patawarin niyo ko’
PACC to NBI: Probe Robredo for ‘competing with national govt’ in fight vs COVID-19
PACC’s COVID-19 motto? ‘Lahat ng tutulong, ikukulong’ — Lacson
5 Filipinos on Forbes Asia’s “30 Under 30” roster
Don't miss out on the latest news and information.