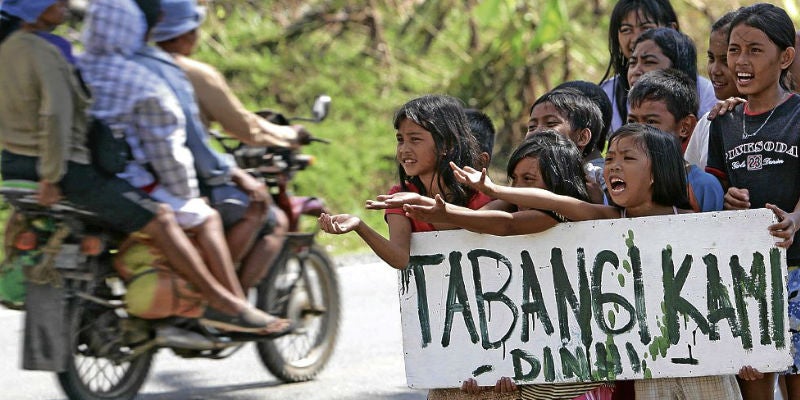 DESPERATE STRAITS Children in Compostela Valley’s New Bataan, one of the towns devastated by Typhoon “Pablo,” stand by the roadside with a sign “tabangi kami dinhi” (help us here) asking passersby and motorists for help. MARIANNE BERMUDEZ

The United Nations on Monday launched a $65 million global appeal to help desperate survivors of a typhoon that killed more than 600 people, left nearly 900 missing and thousands homeless in the southern Philippines.

Malacañang also appealed for help for the survivors of Typhoon “Pablo,” calling on all Filipinos, especially big businessmen, to contribute to the relief effort.

Offices in the Palace on Monday decided to cancel their Christmas parties and donate the food and other goods to the typhoon survivors.

Presidential spokesperson Edwin Lacierda called on all Filipinos to come to the aid of their “countrymen most in need.”

Lacierda appealed to the private sector to provide helicopters to fly relief goods to areas cut off by ruined roads and fallen trees.

He said that aside from food, temporary housing and dry clothes were needed.

“The important thing is shelter because they don’t have roofs over their heads,” Lacierda told reporters.

Carvalho said the funds would initially help provide food, water and emergency shelter to 480,000 people in the worst-hit areas.

The Philippine Red Cross described the desperate situation of the typhoon survivors as a “humanitarian crisis,” with hungry and homeless people in hardest-hit New Bataan town in Compostela Valley reduced to begging for food from passersby.

President Aquino has placed the entire country under a “state of national calamity” to free up government resources and expedite the delivery of aid to typhoon victims.

But rocks, mud, toppled trees and logs swept down from the mountains, and fallen bridges have made roads to New Bataan and to Cateel, Boston and Baganga towns in Davao Oriental impassable, delaying the delivery of relief supplies.

To help move relief, the Philippine Air Force, Navy and Coast Guard joined the response on Monday, ferrying food, medicines, and other supplies to the stricken areas in the Davao region.

The most powerful typhoon to hit the Philippines this year, Pablo struck the Davao region, Central Visayas and Palawan early last week, leaving 674 people dead and nearly 900 missing, including 150 fishermen from General Santos City, the Philippines’ tuna capital, who had put out to sea ahead of Pablo’s landfall.

With winds of up to 160 kilometers per hour, Pablo flattened entire towns, flooded agricultural communities and washed out mining villages.

The National Disaster Risk Reduction and Management Council (NDRRMC) reported Monday that 487,364 families, or 5,412,140 people, in 38 cities and 30 provinces in nine regions were affected by the typhoon.

“Five million people were affected and they need express assistance,” said Imogen Wall, spokesperson for the UN Office for the Coordination of Humanitarian Affairs.

“Their priority needs are food, water and shelter but there’s also a big emphasis on helping people’s livelihood,” Wall said.

“So many farmers have lost their crops and it’s such a poor area. People need to earn money immediately and agriculture has to be rehabilitated,” she added.

The Davao region is the center of both the Philippines’ banana and gold mining industries.

Carvalho said that while Pablo’s death toll was shocking—with one town alone suffering more than 400 dead—the plight of the survivors was quite “worrisome.”

“Entire communities, including pregnant women and children, have no shelter,” she said in a statement sent to the Inquirer.

Carvalho said the United Nations would work closely with Manila “as long as it takes to get everyone back on their feet.”

Under the short-term stage of the UN action plan, she said, the immediate needs of the survivors will be fulfilled. These include food, water, medicine and shelter.

Under the long-term stage of the plan, the survivors will undergo psychosocial therapy to help them recover emotionally, she said.

The United Kingdom, Australia, Canada, and the United States have been the first countries to contribute to the Philippine relief and rehabilitation effort.

China, Malaysia, New Zealand and Singapore have also given aid for the typhoon survivors, according to Raul Hernandez, spokesperson for the Department of Foreign Affairs (DFA).

US Embassy Chargé d’Affairs Brian Goldbeck said US military personnel who arrived in Davao City ahead of Pablo to plan new joint exercises with their Philippine counterparts had been asked to temporarily shelve planning for conferences and help the disaster response in the typhoon-ravaged areas.

Suhartono, who arrived in Davao on Sunday for a three-day official visit, and Dellosa signed a joint military cooperation agreement aimed at strengthening relations between the Indonesian and the Philippine militaries.

In Davao Oriental, military helicopters on Monday started to drop relief goods to residents of hinterland villages, including Butay in Caraga town.

In Butay, about two days’ hike from the town center, 20 families had been waiting for government help a week since the typhoon struck.

“Other areas were not reached by aid yet so we have to use helicopters to bring help there,” Capt. Raul Villegas of the Army’s 10th Infantry Division said, referring to the helicopter trips to New Bataan and Monkayo towns in Compostela Valley.

Navy ships were also being used to bring aid to ravaged parts of Davao Oriental, with relief goods being unloaded at the port of Baganga, one of the badly hit towns in the province.

On Monday the Navy ship BRP Laguna was preparing for another delivery, loading 170,000 tons of relief supplies and planning departure in two days.

“There are donations still coming in so we’ll carry as much as we can,” said Lt. (j.g.) Rommel Rodriguez, Philippine Fleet deputy public affairs officer.

Gov. Arturo Uy of Compostela Valley met with representatives of government agencies and nongovernment organizations on Sunday to discuss the provision of temporary shelters for the typhoon survivors.

“They cannot stay long in the evacuation centers so we have to look for a permanent relocation site,” Uy said.

Social Welfare Secretary Corazon Soliman said during a visit to New Bataan last week that P42 million had been given to her department’s office in the Davao region for relief and  the construction of bunk houses for the homeless survivors.