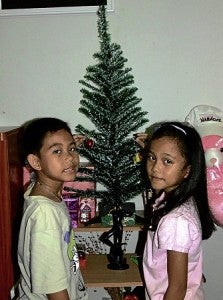 SMALL BUT MEANINGFUL. Junesfil and Lady Zabdiel decorating a small tree at their apartment in Thailand. Its not as big as the one back home but now, they note, the family is together

PITHSANULOK, Thailand—As early as September, Kairos Luther Cordova, 7, started listening to Christmas carols on Internet radio. He wonders why he does not hear Christmas songs blaring all over this city like they do in the Philippines.

Kairos is in Thailand, a predominantly Buddhist country. Commercial establishments here also decorate their display windows with Christmas trimmings. But the holiday season is more subdued than in the Philippines. It is usually a one-day celebration on Dec. 25—which is a working day this year.

Kairos is one of hundreds of Filipino migrant children celebrating Christmas in Thailand. This is his second Christmas outside the country.

“Back home, we had stars and a big Christmas tree, with baby Jesus under the tree,” he remembers. But here, instead of insisting on buying an expensive Christmas tree, Kairos drew a picture of a small one and posted it on their apartment’s wall. Kairos’ parents, Josemari and Eunice are both teachers.

Junesfil and Lady Zabdiel go to St. Nicholas School here, the only Catholic School in Pithsanulok Province. They had a Christmas party at school last year but it was held on Dec. 26.

“We had a short program but it was not as happy as in our school in the Philippines,” he says.

Kairos was enrolled in a Buddhist school last year so he did not experience nor hear Christmas stories in school. This year, he transferred to Padoongrasda School, a Christian mission school in Pithsanulok, thus, he is looking forward to a Christmas party.

Marriane Arby Garrino, 7, does not remember any Philippine Christmas. She has spent most of her years in Oman, where her father, Armando, worked in an oil company. All she can say about Christmas is “Minnie Mouse,” since her family spent Christmas in Hongkong Disneyland when she was five. This is her second Christmas in Thailand, since her father’s transfer in 2011.

Chancellor Baldwin Catane, 17, a college student, misses the noisy firecrackers during the holiday season. This is also his second Christmas in Thailand, where his mother, Nancy, is a university instructor.

“We can’t buy firecrackers here, like we do in the Philippines. We only watch fireworks here,” he says.

But Lady Zabdiel says she likes Christmas in Thailand “because we are complete as a family.”

Her mother, Mary, a teacher, was not home for Christmas for four years.

This year, “Christmas is another working day, because it falls on a Tuesday. We have a holiday on New Year. Thais celebrate New Year,” explains Mary.

For Chancellor, Christmas is midterm exam time. Instead of merry making, he plans to stay home and review.

“Last year, we spent our Christmas with Filipino friends. This year it will be the same. They are now our family here,” he says.

The traditional “noche buena” and exchange of gifts are still practiced by the Filipinos here. In places where there are Catholic or Christian churches, they attend the “traditional simbang gabi” held at night, since most of them work during the day.

On the 24th, the last night of simbang gabi and the midnight mass are  held at the same time. In Protestant churches, Filipinos attend the morning service.

For two-year-old Zef de la Cruz, born in Thailand, his presence makes a perfect Christmas for his parents.

“I want Zef to grow up appreciating Christmas,” says Mithra Maglasang-de la Cruz, an account executive in Korat Province. “We will bring him to the Philippines someday so he can have a taste of a real Paskong Pinoy.” Mithra herself has been celebrating a simpler Christmas in Thailand for nine years now.

This Christmas, Kairos, like many kids, wishes for a spiderman and shark toys. But he also wishes to be with his two elder siblings who are still in the Philippines.

Junesfil wishes for a remote control car but he and Lady Zabdiel also wish for their family to be always together, specially during Christmas.

Chancellor wishes for contentment in the simple things that life brings.

Mithra’s wish for Zef is health and happiness and to come home someday to see their relatives in the Philippines.