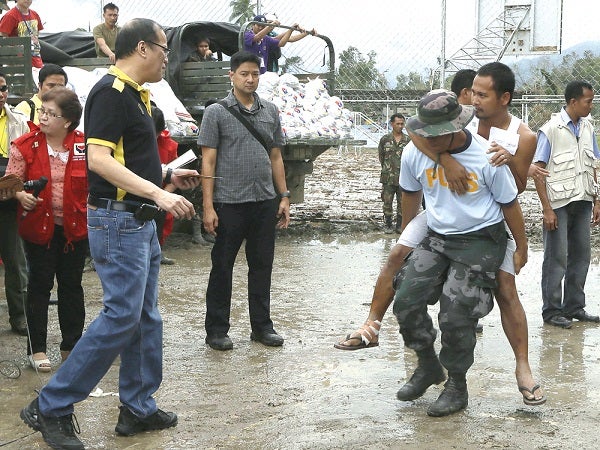 HE AIN’T HEAVY, HE’S MY BROTHER President Aquino distributes cash and relief goods to victims of Typhoon “Pablo” during his visit to the devastated town of New Bataan in Compostela Valley on Friday. BULLIT MARQUEZ/AP

NEW BATAAN, Compostela Valley—President Aquino on Friday flew into this town hardest-hit by Typhoon “Pablo” to meet with bruised and grieving survivors and promise them government assistance in rebuilding their lives.

“We want to find out why this tragedy happened and how to keep these tragedies from happening again,” the President told dazed crowds after arriving by helicopter and seeing most of the town obliterated by the typhoon.

Mr. Aquino said he came here to listen to the victims’ stories but asked them to refrain from assigning blame for the high death toll.

He said he was not satisfied with the level of preparedness and response of the government, both local and national.

“I will not stop, your government will not stop, to [ensure] a better life for you and [to] prevent this kind of calamity [from happening again],” Mr. Aquino said.

Typhoon Pablo (international name “Bopha”), with center winds of 160 kilometers per hour and gusts of up to 195 kph, slammed into Davao Oriental on Tuesday morning. The most powerful typhoon to hit the Philippines this year, Pablo made landfall in Baganga town, flattening it and two other towns, and swept west-northwest, whipping Compostela Valley province as it cut across resource-rich central Mindanao.

The National Disaster Risk Reduction Management Council (NDRRMC) placed the death toll at 418 as of Friday, with 383 people missing and 445 injured.

The Office of Civil Defense in Davao reported the death toll in Compostela Valley at 223 as of Friday.

The Army’s 701st Brigade, citing a report from the provincial disaster risk reduction management council, said the death toll in Davao Oriental had reached 216 as of Friday morning.

Later on Friday, The Associated Press reported that the death toll had surpassed 500, with more than 400 people missing.

The NDRRMC said Pablo displaced more than one million families in seven regions in Mindanao and the Visayas, with nearly 50,000 families huddled in 569 evacuation centers.

As the President spoke, a yellow excavator tore into the rubble of a row of flattened houses a short distance away, allowing rescue workers to pull out the bodies of two more victims.

“They should not have built houses there,” said Interior Secretary Manuel Roxas, one of the officials who came here with the President, noting the place was a mining area, one of the many sites in this province that have served as a magnet for the nation’s poor but have been declared unsafe for habitation because of frequent and deadly landslides.

Roxas told reporters that more rescue workers, equipment and canine units, capable of sniffing out anyone still alive beneath the rubble, were being fielded in the worst-hit areas.

Mr. Aquino handed out cash and food rations to about 2,000 displaced families then took off in a helicopter with his officials to survey typhoon damage in Boston town in adjacent Davao Oriental. His visit here lasted 10 minutes.

The President said he would declare a state of calamity on the recommendation of the NDRRMC.

A declaration of a state of calamity will free government resources for speedy disaster response in the provinces ravaged by Pablo.

The civil defense office said more than 306,000 people had been left homeless by Pablo. The figure had risen by 56,000 from Thursday’s total, and Social Welfare Secretary Corazon Soliman said the government had appealed for immediate international aid for food, tents, water-purification systems and medicines.

“People have no houses to go home to so they are going to evacuation centers for shelter and relief goods,” Soliman said. She was part of the presidential party that visited New Bataan.

Those lucky enough to be inside the New Bataan gym received rice, instant noodles and tinned meat.

But Soliman said they faced being stuck there for months as the government looks for flood- and landslide-free places to build new shelters.

The United Nations said it was prepared to provide humanitarian assistance and to mobilize international support to typhoon victims in Mindanao.

UN Secretary General Ban Ki-moon “extends his sincere condolences to the government and people of the Philippines, particularly those who have lost family members and who have been otherwise affected by this disaster,” Martin Nesirky, UN spokesperson, said in a posting on the UN news website.

“The United Nations stands ready to provide humanitarian assistance and to mobilize international support for the response,” he said.

Australia, Canada and the United States on Friday pledged to send at least P224 million in humanitarian aid to the typhoon victims.

Of the P210 million, Australia said it would immediately make available P38.5 million to the Philippine Red Cross for emergency family kits, which include sleeping mats, mosquito nets and water containers, and another P43 million to the World Food Program for 1,000 tons of rice.

Australia will also provideP4 million through the United Nations Population Fund for hygiene and health kits for people in emergency shelters.

The remaining P126 million will be made available for additional recovery and relief needs, the Australian government said.

Canadian Minister for International Cooperation Julian Fantino said his government, through the Canadian International Development Agency (CIDA), would give the P10-million aid through the International Federation of Red Cross and Red Crescent Societies to support the Philippine Red Cross in its efforts to deal with the emergency needs of the typhoon victims.

The US Embassy in Manila said the United States Agency for International Development (USAID) would provide the $100,000 aid through Catholic Relief Services to support the Philippine relief effort.

Pope Benedict XVI on Friday sent his condolences to the typhoon victims.

In a message to the head of the Philippine bishops conference, Archbishop Jose Palma, the Pope said he was “deeply saddened to learn of the loss of life and the suffering” caused by Typhoon Pablo.

Catholic churches will hold a second collection on Sunday to help the victims of Typhoon Pablo.

Fr. Anton Pascual, executive director of Caritas Manila, the social action arm of the Archdiocese of Manila, said on Friday the churches had been able to provide initial financial support to the dioceses affected by the typhoon in Tagum, Tandag and Butuan.

Residents of Compostela Valley began to bury their dead on Friday as rescuers continued scouring remote areas for survivors.

A relief mission from Bicol, led by Albay Gov. Joey Salceda, leaves on Sunday for Compostela Valley and Davao Oriental to assist in the relief and rehabilitation efforts there.

The mission will provide medical, sanitary and relief sercies in Cateel, Baganga and Boston towns in Davao Oriental and New Bataan here.

He estimated that more than 70 percent of the province was devastated, with damage to agriculture alone placed at nearly P4 billion.

“The saddest part is that Pablo literally wiped out people’s livelihood. People depend on agriculture and it was that sector that was [hit so hard],” Uy said.

Education has been hit hard, too. The Department of Education said nearly all public schools in Compostela Valley were damaged by Pablo.

Four employees of the education department in the Davao region were killed during the typhoon.

The department reported “heavy damage” to schools in the region, with “more than 90 percent of the schools in Compostela Valley alone” sustaining damage.

At least 30 schools in Surigao del Sur were damaged, 26 in Davao Oriental and 12 in Compostela Valley.