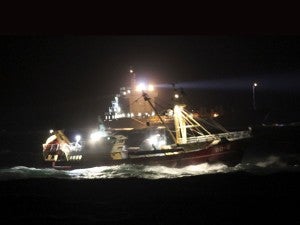 MANILA, Philippines—Two Filipinos died while three others were missing after a cargo ship sank in the frigid North Sea off the Dutch coast, the Department of Foreign Affairs (DFA) said Friday.

The 485-foot Baltic Ace went down quickly after it collided Wednesday with the 440-foot container ship Corvus J in darkness near busy shipping lanes some 65 kilometers off the coast of the southern Netherlands.

Of its 24-member crew, four were found dead. Seven others who remained missing, including three Filipinos, were presumed dead as rescuers said the icy conditions made survival virtually impossible.

Thirteen seafarers were rescued, including five Filipinos, the DFA said.

“Those who survived are now on their way to Rotterdam in the Netherlands and our embassies in Brussels and Hague are in touch with authorities to ensure that adequate assistance are extended to the Filipino victims,” DFA spokesperson Assistant Secretary Raul Hernandez told reporters.

Hernandez did not release the identities of the Filipino crewmembers.

Aside from Filipinos, the Baltic Ace was manned by a crew of Bulgarians, Poles and Ukrainians. Four of the survivors were flown to a hospital in Rotterdam and seven to a military hospital in Belgium. All are expected to recover.

The Baltic Ace, sailing under a Bahamas flag, was heading from the Belgian port of Zeebrugge to Kotka in Finland, and the Cyprus-registered Corvus J was on its way from Grangemouth in Scotland to Antwerp, Belgium. The Corvus J was badly damaged but not in danger of sinking. Its 12-man crew was unharmed and had assisted in the search Wednesday, but Thursday began heading toward Antwerp for repairs.

Hernandez, meanwhile, said that Philippine Ambassador to the Netherlands Lourdes Morales was in touch with the shipping agent of MV Batic Ace and made sure that the needs of the Filipino seafarers were taken care of. With a report from Associated Press