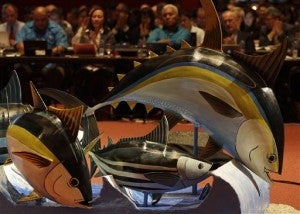 Tuna replicas are on display during the opening of the 9th regular session of the Western and Central Pacific Fisheries Commission in suburban Manila on Sunday, Dec. 2, 2012. Several governments and environmentalists have raised an alarm over destructive fishing methods and overfishing that were threatening the Pacific Ocean’s bigeye tuna, the fish popular among sushi lovers the world over. AP PHOTO/AARON FAVILA

Participants at the conference of the Western and Central Pacific Fisheries Commission (WCPFC) said action must be taken not only to preserve tuna resources but also other marine life that are accidentally caught with them.

Some tuna varieties are overfished while others are near their limits, participants at the meeting said. Additionally, tuna fishers often catch sharks, rays and other fish in their nets, depleting their numbers as well.

The area covered by the WCPFC provides more than 50 percent of all the tuna catch in the world, said Asis Perez, head of the Philippine Bureau of Fisheries.

The commission, which groups over 30 countries and territories ranging from the United States, China and Australia to small Pacific island nations, has a special role in protecting tuna, he added.

Because tuna is a migratory species that moves from one country’s territory to another, cooperation is crucial to sustaining the resource.

WCPFC executive director Glenn Hurry said bigeye tuna, one of the most caught species, was reaching its limits and measures must be taken to limit the catching of this species.

“This is the one we’re worried about. The catch is too big. We need to find a way to reduce that,” he told reporters.

Hurry said the region was producing about 151,000 tons of bigeye tuna annually which was too high.

“We need to reduce that catch by 30 percent,” he said.

But the catching of the other popular varieties –  like skipjack, yellowfin and Pacific albacore – should not increase either, Hurry warned.

“We want to develop a conservation measure for the catching of bigeye, yellowfin and skipjack tuna,” he said.

Among the proposed measures is extending controls on “fish aggregating devices”— floating objects that attract fish in the high seas, making it easier for fishing boats to haul them in.

Such devices often result in the catching of immature tuna as well as other species like sharks, rays and sea turtles, participants said.

The forum will also take up possibly closing the so-called “high-seas pockets” in the Pacific where tuna fishing is permitted but where there are reports of some fishing boats violating commission rules.