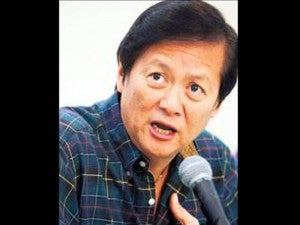 MANILA, Philippines—The arrest warrants against former Palawan Gov. Joel Reyes and his brother for the killing of broadcaster and environmental activist Gerry Ortega will stay as the Court of Appeals ruling invalidating the findings of a justice department investigation panel is not yet final, according to presidential spokesperson Edwin Lacierda.

It goes without saying that the P2-million bounty for the arrest of the former governor and his brother, former Coron Mayor Mario Reyes, would also stay, Lacierda said.

He said Malacañang was upholding Justice Secretary Lilia de Lima’s exercise of her “plenary authority” to create a second panel to re-investigate the murder, arguing that she did not abuse her discretion. He said the Office of the Solicitor General would file a motion for reconsideration with the appellate court.

Ortega was gunned down in January of 2011 in a case that rights groups said highlighted the “culture of impunity” in the Philippines where politicians routinely attack their critics without being punished.

Despite the strong evidence, however, prosecutors initially cleared the Reyes brothers, triggering a public outcry and an intense social-media campaign that forced the justice department to reinvestigate the case.

In March, a new investigation panel created by De Lima ruled there was probable cause to charge the two, and a Palawan court subsequently issued an arrest warrant.

The case, however, suffered a setback last Tuesday, when the appellate court invalidated the findings of the second investigation on a technicality, potentially voiding the arrest warrants.

In its decision, the appellate court’s 5th Division castigated De Lima for abusing her discretion in creating a second panel instead of reviewing the resolution of the first panel, which concluded that there was no probable cause to indict the Reyes brothers.

It said De Lima should adhere to the rules of procedure for the administration of justice, lest her vast powers become susceptible to abuse. “Scary!!” read the decision penned by Associate Justice Leoncia Real-Dimagiba.

Meanwhile, the lawyer of the Reyes brothers, who have been on the run since March, said the fugitive politicians would remain in hiding until a court lifts the arrest warrants against them.

“We will file a motion with the court to get a definitive statement on the lifting of the warrant of arrest against them,” lawyer Ferdinand Topacio said.

“Until we get that, I would suggest to them not to surface first. They are fugitives from injustice,” he said. With AFP