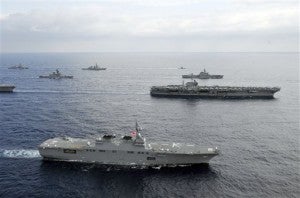 In this photo taken Nov. 16, 2012 and released by US Navy, the USS George Washington aircraft carrier, second row from bottom right, and JS Hyuga, bottom, cruise with other ships from the US Navy and the Japan Maritime Self-Defense Force in East China Sea after the conclusion of Keen Sword, a biennial naval exercise by the two countries to respond to a crisis in the Asia-Pacific region. AP

BEIJING — China’s defense minister and the US Navy secretary on Tuesday discussed security at sea and plans to bolster the US military presence in the Asia-Pacific region that have been sharply criticized by Beijing.

Liang called for “equality, mutual benefit and practical collaboration while developing a new type of relationship between the two militaries,” Xinhua said.

The meeting at the Ministry of National Defense in central Beijing comes just days after China began landing planes on its newly commissioned aircraft carrier, displaying rapid progress toward deploying the ultimate symbol of naval power and force projection.

Mabus also met Tuesday with the commander of the Chinese navy, Adm. Wu Shengli, and plans to tour two ships and a submarine in the eastern port of Ningbo as part of his four-day visit, the US Embassy said.

Beijing has criticized the US’s moves in the Pacific as part of a campaign to encircle and contain China, despite Washington’s claims that it is merely shifting its focus back to the region after winding-down the conflicts in Iraq and Afghanistan. Those steps include dispatching up to 2,500 US Marines to rotate through a joint military training hub in the northern Australia city of Darwin and the deployment of a littoral combat ship — a new type of vessel that can operate closer to shore than other ships — to Singapore as part of a reassignment of naval assets to Asia.

China, for its part, has unnerved its neighbors with its moves to assert its claims in the South China Sea and off its east coast. Recent months have seen a standoff with the Philippines over a disputed shoal and frequent confrontations with the Japanese Coast Guard around East China Sea islands claimed by both sides.

Along with acquiring an aircraft carrier, sophisticated fighter jets, and other modern hardware, China has stepped-up training among the 2.3-million-member People’s Liberation Army. State media on Tuesday repeatedly showed footage of ground exercises in the Nanjing Military District that faces Taiwan, the US-allied island democracy that China threatens to bring under its control by force if it has to.

However, despite sometimes bellicose attitudes on both sides, there is also a growing push for greater contact and communication to avoid misunderstandings and build trust. Officers from the sides are meeting in China this week for exchanges on humanitarian assistance and disaster relief operations that will include a simulated coordinated response to an earthquake in a third country.

Chinese and US sailors have also cooperated in training missions and anti-piracy patrols off the coast of Somalia.