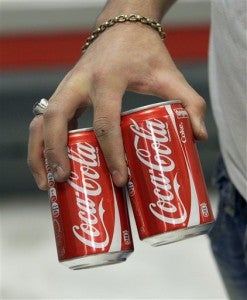 Men who drink one normal-sized soft drink per day are at greater risk of getting more aggressive forms of prostate cancer, according to a Swedish study released Monday, Nov. 26, 2012. AP PHOTO

STOCKHOLM—Men who drink one normal-sized soft drink per day are at greater risk of getting more aggressive forms of prostate cancer, according to a Swedish study released Monday.

“Among the men who drank a lot of soft drinks or other drinks with added sugar, we saw an increased risk of prostate cancer of around 40 percent,” said Isabel Drake, a PhD student at Lund University.

The study, to be published in the upcoming edition of the American Journal of Clinical Nutrition, followed over 8,000 men aged 45 to 73 for an average of 15 years.

Those who drank one 330-milliliter (11-fluid-ounce) soft drink a day were 40 percent more likely to develop more serious forms of prostate cancer that required treatment.

The cancer was discovered after the men showed symptoms of the disease, and not through the screening process known as Prostate-Specific Antigen (PSA).

Those who ate a diet heavy on rice and pasta increased their risk of getting milder forms of prostate cancer, which often required no treatment, by 31 percent, while a high intake of sugary breakfast cereals raised the incidence of milder forms of the cancer to 38 percent, Drake told AFP.

While further research was needed before dietary guidelines could be changed, there are already plenty of reasons a person should cut back on soft-drink consumption, she noted.

The men in the study had to undergo regular medical examinations and kept a journal of their food and drink intake.

Previous studies have shown that Chinese and Japanese immigrants in the US develop prostate cancer more often than peers in their home countries.

Further research on how genes respond to different diets would make it possible to “tailor food and drink guidelines for certain high-risk groups,” Drake said.