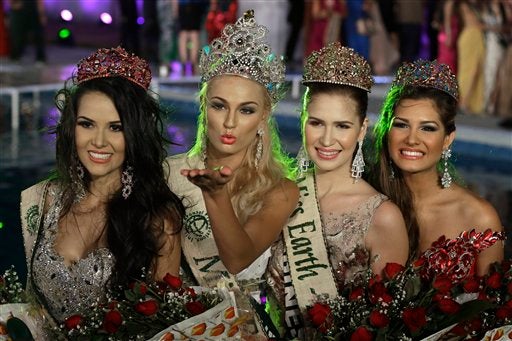 Miss Earth 2012 winner Tereza Fajksova of the Czech Republic, second from left, pose before a throng of photographers after being crowned at the coronation night Saturday Nov. 24, 2012 at Alabang, Muntinlupa city. Other winners are 3rd runner up Camila Goncalves (left) of Brazil, 1st runner up Stephany Dianne Stefanowitz (second from right) of the Philippines, and 2nd runner up Osmariel Villalobos (right) of Venezuela. Organizers dubbed the Miss Earth, which attracted 80 beauty candidates from around the world, as the only beauty pageant with an advocacy to save Mother Earth. AP PHOTO

Stefanowitz, 22, also boosted the country’s pageant record for 2012, following the victories of Queneerich Rehman and Nicole Schmitz, who entered the semifinals of the Miss World and Miss International pageants, respectively.

Fajksová took home $20,000 worth of management contract from pageant organizer Carousel Productions, $1,000 worth of diamond, pearl and gold jewelry from the Amparito Collection of M. Lhuillier Jewelers, a five-night stay at the Best Western F1 Hotel, a Naomi pearl necklace, MyPhone cell phone, a year’s supply of Ever Bilena cosmetics, shoes from Alberto, crystals and precious stones from Charms and Crystals by Joy Lim, a Canon Pixma printer and a specially designed Miss Earth pendant from jewelry designer Ramona Haar who designed the Miss Earth crown.

This year’s competition took sustainable energy as its central theme, following the United Nations General Assembly’s declaration of 2012 as the International Year of Sustainable Energy for All, which aims to ensure universal access to modern energy services.

During the final round of competition, the top four delegates were asked the question, “What is your defining moment as a woman?”

Stefanowitz, earlier voted “Darling of the Press,” replied: “I am a woman of the earth and I’m here to fight and conserve and preserve our environment. My advocacy is basically for the betterment of the environment, because this year we are celebrating the year of sustainable and renewable energy for the rest of the world. And of course, Mother Earth is the most beautiful gift that God has given us. It is our task to fight to preserve it.”

Fajksová, who did not ask for an interpreter, apologized for her minimal grasp of the English language, and responded: “I’m so sorry but I don’t understand the question. I will try to send this message: We have to protect Mother Earth. She gives us everything we need in our lives. So let’s respect her so she’ll respect us.”

The Philippines, Venezuela and Brazil all figured in the Top 4 of last year’s competition, also held in the Philippines.

Aside from Imperial, also in the Top 4 last year were Drielly Bennettone of Brazil who was crowned Miss Earth-Air and Caroline Medina of Venezuela who was hailed Miss Earth-Fire.

Last year’s winner, Olga Alava of Ecuador, turned over her title to Fajksová.

India’s Prachi Mishra was voted Miss Congeniality by her fellow delegates, while Thailand’s Waratthaya Wongchayaporn was adjudged Miss Talent. Both delegates were heavily favored by pageant pundits to advance to the winners’ circle, but failed to crack the semifinals.