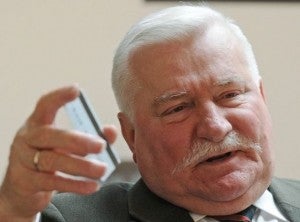 TAGAYTAY CITY, Philippines — Former Polish President Lech Walesa, who led his country in its transition from communist rule to democracy, called on the Filipino media, on Sunday, to help shape the future of the Philippines.

The role of the media today is to “provoke discussions on how this new era will evolve,” according to Walesa, a 1983 Nobel Peace Prize laureate, who gave the closing speech at the 9th Media Nation conference here.

This year’s media summit gathered over 70 Filipino journalists from print, radio, television and Internet-based news organizations taking an honest and a critical look at media corruption, its causes and impact on national life.

“I am pleading with you to continue the discussions so you can find the answer to those questions,” Walesa said.

These questions would revolve around what freedom must be founded on to find the answer to “what the new era will look like,” he said, speaking through his interpreter Josef Sarach, in an interview with the Philippine Daily Inquirer reporters and editors.

Walesa, who became known for launching the 1980 campaign for workers’ rights and the Polish revolution that brought down the communist regime in Poland, was elected president in 1990.

“My revolution and my victory depended so much on media, that’s why I see the solution through media,” he said.

But while he continued to fight for “freedom of work and media,” Walesa threw back the question to members of the press: “What about responsibility?”

Walesa said corruption in media “can be very destructive” and has been everywhere.

“I do not know a country where there is no corruption. It can only be smaller or bigger … We shouldn’t allow it.” he said.

Walesa said the media had the power “to build but can also destroy freedom.”

He said when he was president he had his own gripes against media  “who tried to destroy lead to conclusions that were unjust.”

Walesa said he had seen people falsely accused. “Things that are not true are being carried by the media. This can destroy the politicians and the economy,” he said.

Other media people, he said, resort to inventing accusations for monetary consideration or falling for politicians who pay reporters.

But while false reporting must be guarded, Walesa said this should not mean infringement of the freedom of speech.

“What to do is to stop (corruption in media) but not (to) allow censorship. You do not limit freedom,” he said.

He said the Polish media, which became free after democracy was established, had yet to fulfill this.

“But slowly we can work it out so we can put freedom together with responsibility,” he said.