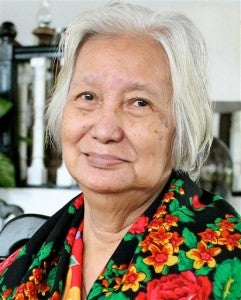 MANILA, Philippines — Zenaida Silva, a veteran Filipino journalist who covered the 1986 “people power” revolt that ousted dictator Ferdinand Marcos and other turbulent political events in the Philippines, has died.

Silva, 80, died on Saturday at a metropolitan Manila hospital after a six-month battle with cancer, according to Silva’s daughter Celine S. Rosario, who was at her bedside when she passed away.

Silva came from a family of journalists. She and her late husband, newspaper writer and TV journalist Manuel Silva, set up and ran the Philippine bureau of London-based Visnews for more than two decades until the international news outfit was acquired by Reuters in 1992 and eventually became Reuters Television.

In 1983, Silva and her husband were among journalists who covered the assassination of anti-Marcos opposition leader Benigno Aquino Jr. while he was in military custody at Manila’s international airport and the political chaos that followed. Aquino’s murder galvanized the fragmented opposition and sparked massive protests, which culminated in the army-backed 1986 “people power” revolt that ousted Marcos and catapulted Aquino’s wife, Corazon, to the presidency.

The uprising became a harbinger of change in authoritarian regimes worldwide. The country’s current president, Benigno Aquino III, is a son of the Aquinos.

After helping oversee Visnews’ operations in Manila, Silva worked as a freelance producer and contributor for ABC Australia and U.S.-based NBC News. When her husband died in 2003, Silva took over his reporting work for popular local radio station DZMM, which is run by leading Philippine network ABS-CBN, covering the Philippine air force and Manila’s international airports.

Silva’s survivors include her five children and five grandchildren.