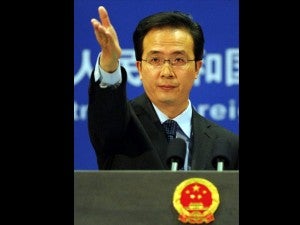 BEIJING—China on Tuesday rejected calls by the Philippines for the two nations to bring their conflicting claims in the West Philippine Sea before a United Nations-backed tribunal.

He added the row should also be dealt with according to “recognized international laws”.

China and the Philippines have overlapping claims to parts of the West Philippine Sea, which is believed to hold vast mineral resources, as do Vietnam, Brunei, Malaysia and Taiwan.

Philippine Foreign Affairs Secretary Albert del Rosario, who visited China last week, said he called for the dispute to go before the International Tribunal for the Law of the Sea in his meetings with senior officials.

The tribunal is an independent judicial body established by UNCLOS, the United Nations Convention on the Law of the Sea, to handle disputes.

Speaking to reporters after his visit, del Rosario said he pointed out that the Philippines’ claims over parts of the West Philippine Sea, including the Spratly islands, were “based on international law, specifically UNCLOS”.

Chinese officials however said their claims were based on “historic rights”, the secretary said.

The Philippines and Vietnam have in recent months accused China of taking increasingly aggressive actions in staking its claims in the disputed waters, including an incident where the Chinese allegedly fired on Filipino fishermen.

In April, the Philippines lodged a formal protest at the United Nations over China’s claims.