Kasambahay law lives up to PH commitment under int’l treaty 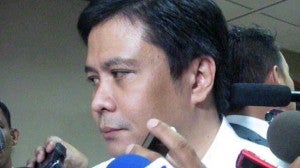 MANILA, Philippines—Once signed into law, the Kasambahay will solidify Philippines’ adherence to a global agreement that sets labor standards for domestic workers.

Senate President Pro Tempore Jose “Jinggoy” Estrada said the country was a signatory to Convention 189 of the International Labor Organization that provides for the protection of domestic workers.

Aside from an across-the-board wage of P2,500 minimum monthly pay for household workers in Metro Manila and lower rates elesewhere, Estrada said the bicameral report he will sponsor on Monday also ensures that household workers are:

•   Protected from any kind of abuse or any form of physical violence or harassment;

•   Given basic necessities, including “at least three” adequate meals and safe sleeping arrangements; privacy in their communication and personal effects and access to outside communication;

•   Allowed by the employer to finish basic education or access to alternative learning systems, higher education or technical and vocational training.

Estrada, chairman of the Senate labor committee, said domestic workers would also be entitled to a daily rest period of eight hours and a weekly rest period of “at least 24 consecutive hours.”

A domestic worker who has rendered at least one year of service would be entitled to an “annual service incentive leave” of five days with pay.

In an earlier interview, Estrada said the arguments centered on the disagreement over minimum pay to be given to domestic workers.

The House panel was initially hesitant to approve the minimum monthly wages, saying employers in the provinces did not earn as much as those in urban areas and might not be able to afford these amounts.

Congressmen also wanted the wages of provincial domestic helpers to be subject to approval by regional wage boards.

Eventually, the bicameral panel settled on P2,500 monthly minimum for domestic workers in Metro Manila, P2,000 for those in first-class municipalities and chartered cities and P2,000 in other areas.

Estrada said Section 1 of Article 2 of the ILO convention requires signatories to “take measures to ensure the effective promotion and protection of the human rights of all domestic workers.”

“The passage of Kasambahay Bill is a fulfillment of the country’s commitment to the international community when it ratified the domestic workers convention. More importantly, this aims to protect the welfare of more than two million househelpers, nursemaids, cooks, gardeners and laundry persons all over the country,” he added.