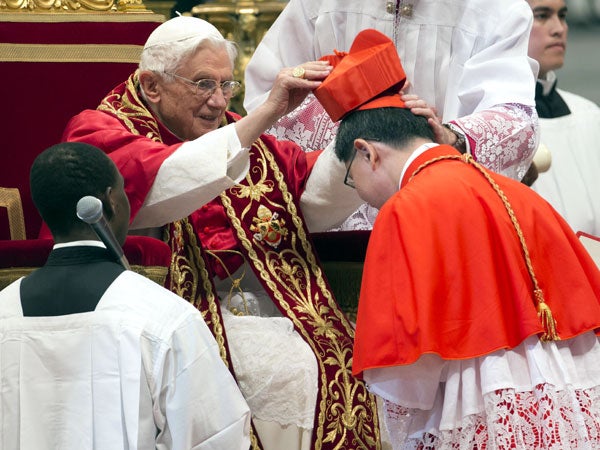 Newly-installed Cardinal Luis Antonio Tagle, right, receives the red three-cornered biretta hat as he is elevated to cardinal by Pope Benedict XVI during a consistory inside St. Peter’s Basilica at the Vatican, Saturday. AP

During a solemn consistory in St. Peter’s Basilica at the Vatican, Benedict bestowed a three-pointed red hat and a gold ring on Tagle, installing him as the seventh Filipino cardinal in the nearly 500-year history of Catholic faith in the Philippines.

Benedict embraced Tagle after conferring the symbols of the Fillipino prelate’s new rank as a “prince” of the Church.

Tagle, seen by many to be a rising star in the church, visibly choked up as he knelt before Benedict to receive his biretta and gold ring, and wiped tears from his eyes as he returned to his place.

The 55-year-old Tagle is noted for his young, modern approach. In February, he openly urged the Church to tackle child-sex-abuse offenders and has called on bishops to report rather than protect paedophile suspects in the wake of the scandals that rocked the Catholic Church.

Cardinal Tagle was assigned the Church of Saint Felix of Cantalice a Centocelle, once held by the late Cardinal Stephen Kim Sou-hwan, Archbishop of Seoul, South Korea.

The prayer guide released by the Vatican for the consistory said the back part of the cardinals’ rings represented “the stylized column found in St. Peter’s Basilica, while the face is a bas-relief in the shape of a cross.”

“On the face are figures of St. Peter and St. Paul, modeled on their statues located in front of the basilica, representing faith and missionary proclamation,” the guide said.

“Between the two saints, as if to illumine them, is placed an eight-pointed star, a clear reference to the Blessed Virgin Mary. Inside the ring, beneath the face, are the arms of Pope Benedict XVI in bas-relief,” it said.

The pontiff presided over the ceremony where five other clergies from Colombia, India, Lebanon, Nigeria, and the United States were elevated.

Aside from Tagle, Benedict elevated Archbishop James Harvey, the American prefect of the papal household; Abuja, Nigeria Archbishop John Olorunfemi Onaiyekan; Bogota, Colombia Archbishop Ruben Salazar Gomez; Patriarch of Antioch of the Maronites in Lebanon, His Beatitude Bechara Boutros Rai; and the major Archbishop of the Trivandrum of the Siro-Malankaresi in India, His Beatitude Baselios Cleemis Thottunkal.

As Benedict read each name aloud in Latin, cheers and applause erupted from their friends and family members in the pews.

Abuja, Onaiyekan, meanwhile, seemed to want to sit down and chat with each one of the dozens of cardinals that he greeted in the traditional exchange of peace that follows the formal elevation rite.

Benedict has said that with this “little consistory,” he was essentially completing his last cardinal-making ceremony held in February, when he elevated 22 cardinals, the vast majority of them European archbishops and Vatican bureaucrats.

Benedict said Saturday that the new cardinals represent the “unique, universal and all-inclusive identity” of the Catholic Church.

“In this consistory, I want to highlight in particular the fact that the church is the church of all peoples, and so she speaks in the various cultures of the different continents,” he said.

The six new cardinals “show that the Church is the Church of all peoples and speaks in all languages,” Benedict said in November. “It’s not the church of one continent but a universal church,” he said.

That said, the College of Cardinals remains heavily European, even with the new additions: Of the 120 cardinals under age 80 and thus eligible to vote in a conclave to elect a new pope, more than half—62—are European.

Critics have complained that the College of Cardinals no longer represents the Church, since Catholicism is growing in Asia and Africa but is in crisis in much of Europe.

The issue of numbers is significant since these are the men who will elect the next pope from among their ranks: Will the next pontiff come from the southern hemisphere, where two-thirds of the world’s Catholics live? Or will the papacy return to Italy, which has 28 voting-age cardinals, after a Polish and German pope?

The new cardinals do make the papal voting bloc a bit more multinational: Latin America, which boasts half of the world’s Catholics, now has 21 voting-age cardinals; North America, 14; Africa, 11; Asia, 11; and Australia, one.

Harvey, as the American prefect of the papal household, was the direct superior of the pope’s former butler, Paolo Gabriele, who is serving an 18 month prison sentence in a Vatican jail for stealing the pope’s private papers and leaking them to a reporter in the greatest Vatican security breach in modern times.

The Vatican spokesman has denied Harvey, 63 from Milwaukee, is leaving because of the scandal. But on the day the pope announced Harvey would be made cardinal, he also said he would leave the Vatican to take up duties as the archpriest of one of the Vatican’s four Roman basilicas. Such a face-saving promotion-removal is not an uncommon Vatican personnel move.

Harvey’s departure has led to much speculation about who would replace him in the delicate job of organizing the pope’s daily schedule and arranging audiences.

Cardinals serve as the pope’s closest advisers, but their main task is to elect a new pope. And with Benedict, 85, slowing down, that task is ever more present. For the second time, the consistory ceremony was greatly trimmed back, lasting just over an hour to spare the pope the fatigue of a lengthy ceremony.

He will, however, celebrate Mass on Sunday with them.

While Benedict didn’t mention the cardinals’ primary task in his remarks, he did remind them that the scarlet of their cassock and hat that they wear symbolizes the blood that cardinals must be willing to shed to remain faithful to the church.

“From now on you will be even more closely and intimately linked to the See of Peter,” he said.

The six new cardinals are all under age 80. Their nominations bring the number of voting-age cardinals to 120, 67 of whom were named by Benedict, all but ensuring that his successor will be chosen from a group of like-minded prelates.

Saturday’s consistory marks the first time in decades that not a single European or Italian has been made a cardinal — a statistic that has not gone unnoticed in Italy. Italy still has the lions’ share of cardinals, though, with 28 voting-age “princes” of the church.

Among those present at the consistory were Vice President Jejomar Binay and Lebanese President Michel Suleiman and lawmakers from India and Nigeria. With a report from Associated Press in Vatican