64 Pinoys intercepted in ‘back door’ trafficking 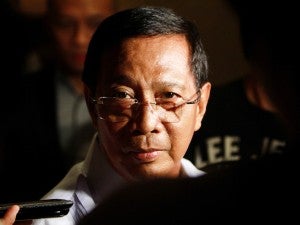 The 64 were intercepted in three successive operations on Oct. 5, 7, and 8 for failing to present travel documents to Malaysia, Binay said.

“The Bongao seaport is a favorite exit point of trafficking syndicates due to its proximity to the Malaysian mainland,”  added the Vice President, who is the honorary chairman of Iacat.

He added that the 64, who were recruited from various parts of the country, have been turned over to a nongovernmental organization for debriefing, counselling and temporary shelter.

It was not disclosed who these recruits were and what kind of job they were recruited for.

Meanwhile, the Vice President said Iacat and the National Bureau of Investigation (NBI) operatives also rescued two women, including a 15-year-old minor, from their allegedly abusive employer in Pasig City.

The women, who hail from Zamboanga del Norte, said they were originally promised work as salesladies in Marawi City but were instead brought to Manila on July 30 to work as domestic helpers.

Binay said the two complained they were not allowed to go outside and were only paid one month’s wages despite having worked for their employer for four months.

“The two victims said they had wanted to go home but were prevented by their employer from doing so,” the Vice President said.

“Their employer has been arrested and is now in the custody of the NBI,” he added.