Timing of US military exercises ‘inappropriate’–China 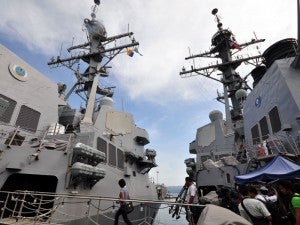 BEIJING, China–China’s top military officer on Monday called the timing of American naval exercises in the sensitive West Philippine Sea (South China Sea) “inappropriate”, after holding talks with his US counterpart in Beijing.

Chen Bingde also urged the United States to be “more modest and prudent in words and deeds”, amid growing tensions over China’s territorial claims in the strategic and potentially resource-rich West Philippine Sea.

“On various occasions, the US side has expressed that it does not have the intention to intervene in the disputes in the South China Sea,” Chen told reporters after meeting Admiral Mike Mullen.

“However, we are observing the latest joint exercises between the US and other countries for example the Philippines and Vietnam.

“We acknowledge that those exercises were there in the past, however the timing of these joint exercises is inappropriate as we see it.”

Vietnam and the United States are to hold joint naval activities this month, but the US Navy has said these were long-planned and are unconnected to recent tensions.

The Philippines recently finished 11 days of naval exercises with the United States close to the West Philippine Sea, although both sides also emphasised the event was an annual one aimed at deepening defence ties.

Mullen is the first chairman of the US Joint Chiefs of Staff to visit China since 2007 and his trip comes as military ties between the two powers are tested by Beijing’s growing assertiveness in the West Philippine Sea.

Speaking after the pair met on Monday, Chen said they had “found a lot of common ground”, but that there were still “different opinions on certain issues.”

“I sincerely and truly hope that our American friends will understand the underlying logic, and be more modest and prudent in words and deeds,” he added.

“The key to developing healthy, stable and reliable military relations is mutual trust, and the pre-condition is mutual respect.”

Beijing’s recent assertiveness over territorial claims in the West Philippine Sea has raised tensions with neighbouring countries that Washington fears could spiral dangerously out of control.

China, the Philippines, Vietnam, Brunei, Malaysia and Taiwan have overlapping claims to parts of the South China Sea, which is believed to have vast oil and gas deposits, while its shipping lanes are vital for global trade.

Vietnam and the Philippines have in recent months accused China of taking increasingly aggressive actions in staking its claims in the disputed waters and its archipelagos.

In response, China has insisted it wants to resolve territorial disputes peacefully but remains firm in its claims to most of the South China Sea, even waters within the Philippines’ economic exclusion zone.

Speaking to reporters after arriving in Beijing on Sunday, Mullen said Washington was concerned about freedom of navigation, but expressed hope that the myriad disputes would be “resolved peacefully”.

Mullen was also due to hold talks Monday with China’s vice president Xi Jinping, who is widely expected to take over as president next year.