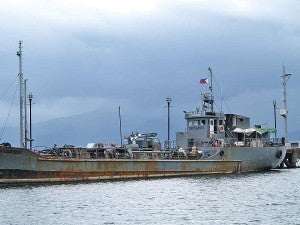 MANILA, Philippines—Laboratory tests showed that the wastes dumped in Subic Bay by a US Navy contractor in October were hundreds of times beyond the permissible limits and would definitely cause damage to the aquatic ecology.

Senator Loren Legarda presided over the Senate inquiry Wednesday over the 440,000 liters of sewage allegedly dumped around 17 nautical miles off Subic Bay Freeport last October 15  by the MV Glenn Guardian.

Vice Admiral Mateo Mayuga, chairman of Glenn Defense Marine Asia the US Navy contractor, however questioned the laboratory results saying the collection of samples was not properly conducted.

Angel Bagaloyos, manager of the Subic Bay Ecology Center, who conducted the tests, said that the samples from the MV Glenn Guardian were found to be “in excess of permitted effluent standards”

The Biological Oxygen Demand, a measure of how much bacteria are in the water that consumes oxygen, was found to be 750 milligrams per liter (mg/L). The acceptable limit is at 30 mg/L, according to the Department of Environment and Natural Resources.

The Chemical Oxygen Demand, a measure of how much oxygen in the water is needed to break down organic matter, was found to be 1,485 mg/L. The standard is only 60 mg/L.

Oil and grease that come from kitchens was found to be 30 mg/L, beyond the allowed limit of 5 mg/L.

Total suspended solids in the water were found to be 252 mg/L, exceeding the standard of 50mg/L.

Bagaloyos, when asked by Legarda on the impact of these wastes on the marine ecology, he said that fish would definitely die.

Mayuga maintained that they dumped the wastes beyond the standard distance of 12 nautical miles for untreated wastes required by the Philippine Coast Guard (PCG).

Legarda however pointed out that though these were not technically hazardous wastes, they still contained high levels of toxicity that were dangerous to aquatic life and were still within the country’s Exclusive Economic Zone.

The Glenn Guardian had also not secured a dumping permit from the PCG, a standard requirement for all ships whether local or foreign.

“It is very clear that there are violations committed by Glenn Defense Marine Asia,” Legarda said.

She said she might recommend to the Maritime Industry Authority (Marina) to suspend the license of MV Glenn Guardian.