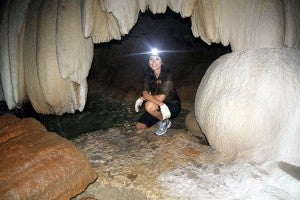 BANI, Pangasinan—Call it the best-kept secret of this western agricultural town: A virtually unexplored 4-kilometer-long cave with underground waterfalls and pools, white stone terraces and unique formations of stalactites and stalagmites.

The cave’s existence was, until recently, unknown to people out of town. Only residents knew about the ecological treasure, whose entrance looked so dangerous and mysterious that even owners of the land where it is located are afraid to explore its depths.

“We hardly went inside even when we were still young boys. When we did, it was only up to the area where daylight penetrated,” said Lincoln Tagay, 67, whose family owns the land in Barangay Centro Toma where the cave is.

As boys, Tagay and his brother, Andrew, 60, would play in the cave but never got to fully explore it. They went as deep as 50 meters from the cave’s entrance, which is covered with thick vegetation.

Exploring the cave means descending 25 to 30 m through ledges and cracks on the steep mountainside, holding on to tree branches, protruding roots, vines or thick ropes earlier put there by locals.

“But he kept mum about the discovery, thinking the cave would suffer the same fate like Nalsoc Cave (also in Bani), which was destroyed by adventurers and tourists,” Navarro said.

Two months ago, employees of the Department of Environment and Natural Resources and the local government explored the cave.

Rodel Quibuyen, Bani’s planning and development officer, said the team reached 4-km deep but could not go on because water already reached the cave’s ceiling.

“We had no oxygen tanks and the air was thick we could hardly breathe. Also, we did not know where the water leads, so we decided to call it a day,” Quibuyen said.

“The presence of bats near the deep water, however, could mean that we are reaching the exit,” he added.

A survey team was again sent two weeks ago to map the features of the cave.

Rodel de Vera, a local government employee who was trained on cave management, said the team surveyed only up to 650 m.

De Vera guided a group into the cave last week. At least 100 m into the cave, white rocks, small pools and stairways emerge from the darkness.

One way of getting in is to rappel down a 3-meter-high water slide that ends in more water. At least 350 m into the cave emerge more pools, chambers, white drapes, stalactites and stalagmites of different formations.

“This is a living cave,” Quibuyen said.